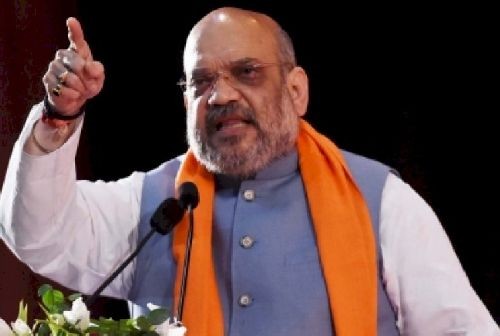 Union Home Minister Amit Shah made a very profound and pertinent statement that under the leadership of Prime Minister Modi, we shall overcome the two "jung" of COVID-19 and China and win both battles.

Our visionary Prime Minister's leadership in the battle against the unprecedented catastrophe -- COVID-19 -- has been unflinching, unparalleled and truly inspirational and needs to be emulated by other nations. Apart from the timely anticipatory and preemptive action taken by the Prime Minister, when the first few case of coronavirus were reported from across the world, immediate proactive steps, in union with the states, were taken to enforce the lockdown, including strengthening our medical infrastructure as also all other conceivable enforcement, containment, medical, safety and relief measures for the benefit of every section of society. The government measures, along with the indomitable determination and spirit of 130 crore patriotic Indians, enabled the country to promptly and effectively, respond and control the situation which would, otherwise, have been unimaginable. In the concerted crusade against this pandemic, neither did PM Modi invoke his emergency powers, nor resort to authoritarian measures nor call in the army to enforce restrictions, unlike many other countries; he only motivated all Indians who had reposed full faith and whole hearted trust in his leadership.

Having, dexterously, steered the country, victoriously, in the initial stage, PM Modi announced a gradual opening up of the economy, coupled with a Rs 20 lakh crore package and a slew of measures for economic renewal with special emphasis for the MSME sector. At the same time, he also took care of the needs and welfare of the poor and migrants.

In his address to the nation on June 30, 2020, he mentioned that the welfare of the poor was his government's topmost priority. The GaribKalyan Anna Yojana, which had been in operation for the last three months so that the poor would not go hungry during the pandemic, has been extended till November end. Eighty crore poor people will get five kgs of free food grains each month till November. Each family will also get one kg of "channa" each month till November. The "one nation one ration card" system shall also be implemented to enable migrants to access the public distribution system anywhere in the country. "Under the lockdown, our national priority was to ensure that no one who was poor went hungry. The Centre, state governments and civil society worked hard to ensure that no one was hungry". The Prime Minister stated that "We will work sincerely for Atmanirbhar Bharat".

During the last three months, the Government strengthened the medical infrastructure. Today India's medical prowess is well exhibited by the fact that our recovery rate today is 59.07 per cent. As per the report of DD News, on June 29, 2020, India now has 1,036 COVID-19 dedicated laboratories, 1,055 dedicated COVID hospitals, 1,77,529 Isolation beds, 23,168 ICU beds, 78,060 oxygen supported beds, 2400 dedicated health centres and 9,519 covid care centres with 8,34,128 beds. A total of 86,08,654 samples have been tested till now and 187.43 lakh N95 masks and 116.99 lakh PPE kits were distributed by the Centre to the States/Union Territories and Central institutions. While the number of cases as on June 29, 2020, is 5,28,859, the death toll is 16,095, i.e., one of the lowest mortality rates in the world. In the fight against COVID-19, despite the unpredictable and unconceivable behaviour of this virus and multifarious connected problems, uncertainties and unknowns,the Prime Minister has displayed stellar leadership with grit, dedication, sincerity and conviction.

While the world was battling this virus and this was the time when we needed to cooperate to fight this global calamity, China chose to embark on a misadventure in the Galwan valley which was more than ably thwarted by our valiant soldiers. In his broad-cast in "Man Ki Baat", the Prime Minister said "those who cast an evil eye on Indian soil in Ladakh have got a befitting response. India honours the spirit of friendship .... she is also capable of giving an appropriate response to any adversary without shying away." "Our brave soldiers have proven that they will not let anyone cast an evil eye on the glory of Mother India," said the Prime Minister. And what happened is because earlier the Congress governments never bothered about infrastructural development at the border and had meekly turned a blind eye to the nefarious nibbling away of our territories through continuous border violations and transgressions by China.

While infrastructure on the Chinese side had, during this period, increased by leaps and bounds, there was no such concomitant development on the Indian side. Strengthening infrastructure only became a national priority when Sh. Narendra Modi became Prime Minister. Today, it is only thanks to his farsightedness that we have created and are still creating a robust network of roads and other infrastructural works, to beef up security of the border. Hand in hand, our patrols have been actively confronting the PLA in face-off and stand offs and have not allowed any incursions and indiscretions from the other side. Our forces have blocked all Chinese designs to encroach upon our territories with aplomb. The Doklam standoff was certainly a diplomatic victory for India and today China is well aware of India's capability and resolve.

While we are in the process of dealing with Covid and China, under PM Modi, we have already firmly tackled a frustrated Pakistan. It has been only due to PM Modi that we have achieved the abrogation of Article 370 - the greatest achievement since independence. A determined and patriotic Prime Minister took this historical step to rejuvenate India unity, pride and development. Long years of unrest had not only led to the killing of 41,500 people on J&K since 1989 but also had deprived the people of peace, tranquility and development. The special status of Article 370 and 35A had insulated the State from the other parts of India leaving it economically backward.

Immediately after the formation of the Ladakh UT & J&K UT, Panchayati Raj institutions were established and made functional and Rs 366 crore was released directly to 4,483 Panchayats, which money was always diverted earlier to vested pockets. Work on the 2,206 languishing projects was started. The process for creation of 45,000 employment opportunities began. The government started vigorous road construction works, initiation and acceleration of several power generation and transmission projects, enabling achievement of 100 per cent household electrification, flood management and water supply projects, improved medical infrastructure, setting up of over 330 schools and colleges and a university, beginning of a light rail and public transport system, welfare measures for all including housing, implementation of women and child welfare schemes, disposal of outcome based grievances, scholarships for the deserving, support to farmers, orchardists and unorganized workers, expansion of tourism facilities, sports infrastructure and border area development. All these projects and many more, will soon germinate and blossom, in greater proportion and restore full confidence of the people. Finally, terrorism, and peoples' miseries will certainly come to an end, despite Pakistan's frustrated efforts to activate its "deep state" again to heat up the environment, even in this state of the COVID pandemic.

Whether it is the war against COVID-19 or military and diplomatic preparedness or the much needed digital strike against China or the earlier conducted surgical strikes, our country shall not be found wanting and, united, we shall prevail. It is well seen from all this "country first" vision, that the Prime Minister has displayed, great statesmanship and patriotism of the highest order, in his persevering endeavour, with unstinted resolve. He has navigated the country deftly and truly depicts an untiring patriotic warrior "of the people, by the people and for the people." And he will ensure that we shall prevail.

(R. K. Pachnanda is a retired Director General, ITBP. His views are personal.)