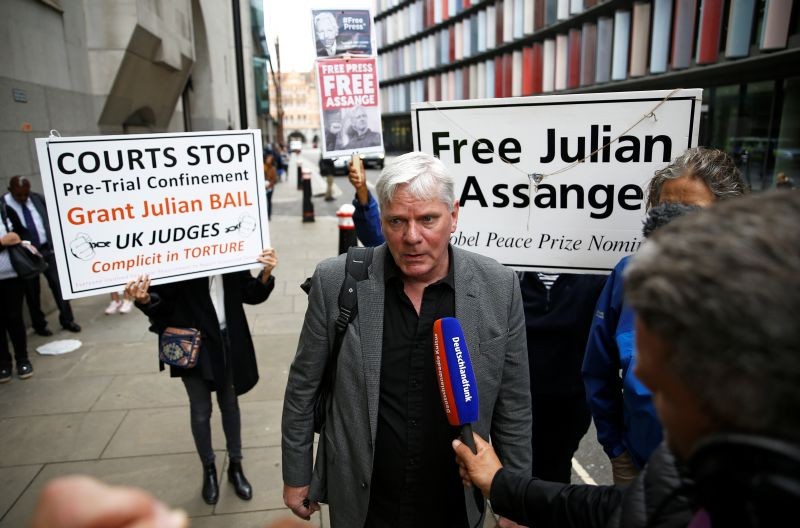 WikiLeaks editor Kristinn Hrafnsson speaks to reporters outside the Old Bailey, the Central Criminal Court ahead of a hearing to decide whether Julian Assange should be extradited to the United States, in London, Britain on September 8, 2020. (REUTERS File Photo)
World
16th September 2020

LONDON, September 16 (Reuters): WikiLeaks' founder Julian Assange was careful to ensure that the names of informants in hundreds of thousands of leaked secret U.S. government documents were never published, his London extradition hearing was told on Wednesday.

Australian-born Assange, 49, is fighting against being sent to the United States, where he is charged with conspiring to hack government computers and violating an espionage law over the release of confidential cables by WikiLeaks in 2010-2011.

A lawyer for the United States told the court last week that it was requesting Assange's extradition over the publication of informants' names, and not for handling leaked documents.

John Goetz, an investigative reporter who worked for Germany's Spiegel magazine on the first publication of the documents, said the U.S. State Department had been involved in a conference call suggesting redactions, and WikiLeaks had agreed to hold back about 15,000 documents for publication.

"There was sensitivity and it was one of the things that was talked about all the time," Goetz told the court. Assange was concerned that the media should take measures "so no one would be harmed", he said.

Goetz said WikiLeaks was later frustrated when a password that allowed access to the full, unredacted material was published in a book by Guardian reporters in February 2011.

Assange made international headlines in 2010 when WikiLeaks published a U.S. military video showing a 2007 attack by Apache helicopters in Baghdad that killed a dozen people, including two Reuters news staff.

Assange's lawyers argue that he would not receive a fair trial in the United States and that the charges are politically motivated. They have also said he would be a suicide risk if sent to the United States, where they say he could be sentenced to 175 years in prison.

In 2012, Assange took refuge in Ecuador’s London embassy to avoid extradition to Sweden where he was accused of sex crimes, which he denied and which were later dropped.

After seven years, he was dragged from the embassy in 2019 and then jailed for skipping bail. He has remained in prison ever since, after the United States made its extradition request.