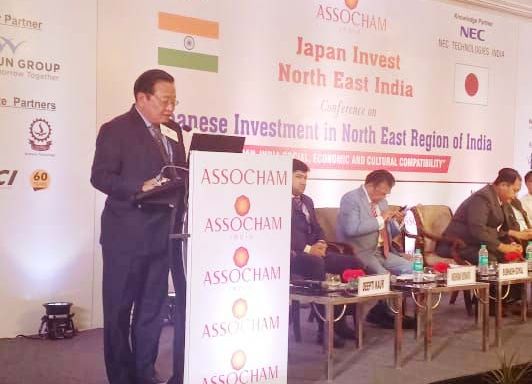 DIMAPUR, AUGUST 16 (MExN): The Investment and Development Authority of Nagaland (IDAN), Government of Nagaland led by the Chief Executive Officer (CEO), Alemtemshi Jamir held high level meetings with relevant industry stakeholders during the team’s recent trip to New Delhi to improve upon the existing investment scenario of the State.
This was informed in a press note from T Nengshi Wati, Project Analyst.

Discussions with RK Sharma, Director-General, Federation of Indian Minerals Industry  (FIMI) and Skill Council for Mining Sector (SCMS) touched upon the necessity of drafting a Minerals Policy to regulate and maximize output in the minerals reserve of State. Some immediate actions to be pursued are a draft Policy on Non-Petroleum Minerals to be submitted by FIMI as subject-matter experts, tailored to the needs specific to the State.

The IDAN also visited the Invest India Haryana office, ranked number 3 in the Ease of Doing Business (EODB) in the country, and interacted with Divisional Commissioner, Ashok Sangwan to study the measures that have been taken by the Haryana Government for EODB.

Other meetings were with the Leather Sector Skills Council (LSSC) to examine the prospects of establishing a Leather Industry in the State such as tannery units, supply of hides, skills development training etc; and prospects of telemedicine initiatives that would cater to most non-critical care services such as blood testing, pressure-check which are a part of Rapid Test Kits. Additionally, such initiatives envision to reach out to school children and ready them with the knowledge of Telemedicine, the press release added.

In another meeting with Dr Didar Singh, Ex-Secretary General of Federation of Indian Chambers of Commerce and Industry (FICCI), discussions reasoned that the immediate concern for the State was to look into matters of Minerals, Infrastructure and Skills Development. As next step, it was observed the Government of Nagaland should organize a ‘Start Up Summit’ to identify immediate solutions to enable the investment atmosphere.

Japan Invest-North East India Meet
In the recently held Japan Invest - North East India Meet, the Government of Nagaland as State Partner in association with Knowledge Partner, Associated Chambers of Commerce and Industry (ASSOCHAM) and Conference Partner Japan Chamber of Commerce and Industry in India (JCCII) was represented by the Investment and Development Authority of Nagaland (IDAN) led by its CEO, Alemtemshi Jamir.

Jamir invited a “long partnership in perpetuity” and highlighted that the foremost requirement for Nagaland from Japanese investors as well as the Indian investors is infrastructure development of roads and highways, airways and railways. He also emphasized on the importance of Skill Development for the Naga youth and how with the right kind of training and building upon the nature of the Nagas such as their hospitability, high literacy and command over English-speaking, the Japanese and the rest of the world can harness the potential of the Naga youth, simultaneously addressing the high unemployment rate in the State.

HE Kenko Sone, Minister of Economics, Embassy of Japan in India remarked that the investment needs of the North Eastern States of India is not much different to the rest of the country. However, what sets apart the North Eastern States is its people, who are found to be caring and diligent, and share affinity with the Japanese in terms of physical characteristics and mentality, Sone observed. Sone therefore stressed on the need to take advantage of this potential, and tap into this unseen connectivity as a way forward in establishing linkages between the Japanese and the NE States.