9 years since sanction, road in Pungro yet to be completed

A section of the road from Mimi to Khongka and Hakumuti which is yet to be completed despite being sanctioned in 2012.

The 42 km road project was sanctioned under the Pradhan Mantri Gram Sadak Yojana (PMGSY) at a cost of Rs 15,68,29,000 and the work was assigned to a firm called Hexad Syndicate.

Citing RTI replies and the DPR, the student unions informed that agreement between the contractor, the Chief Engineer, PWD (R&B) and the Empowered Officer, PMGSY, NGRRDA Nagaland was signed on April 9, 2012.

The student unions, in a press release, said that despite repeated appeals to the firm and the department, “till date there is no sign of completing the said project.” They informed that of the 42 km total road length, only 29 km has been constructed.

The student unions informed that they had appealed to the department to conduct a spot verification in 2019 but the same was not carried out. “We received a letter from the Office of Chief Engineer, PWD (R&B), Nagaland assuring to resume the work at the earliest and complete the same by December 2019. This has not resumed till date,” it stated.

The unions stated that according to RTI replies, 72% of the bill has been released, while the “actual work executed or blacktopping is approximately 3 km to 4 km of the cheapest quality.”

They sought to draw the present government’s attention to “the department’s policy of neglecting the eastern most part of Nagaland,” and expressed disappointment at “the continuous step motherly treatment melted out towards us. “The public can also no longer listen to the false assurances after assurances for the last 11 years,” the student unions stated.

They further alleged that during the unions’ visit to the office of the Executive Engineer, PMGSY in Kohima on July 17, 2019, “the then Executive Engineer, PMGSY sadly stated that there is no need of constructing a good road at the eastern most part of the state.” They termed this as “unbecoming and questionable,” and said this is “clear sign of ill treatment towards Eastern Nagas.”

“Which part of the state deserves good road? Give us the reason why we don’t deserve the good roads?” the unions queried.

The student unions questioned the government as to who was responsible for the state of the project and demanded that work execution begin at the earliest. 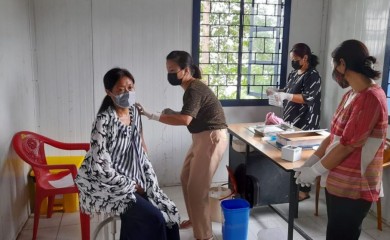