Despite efforts to eradicate Ram's existence, he lives in our hearts: Modi 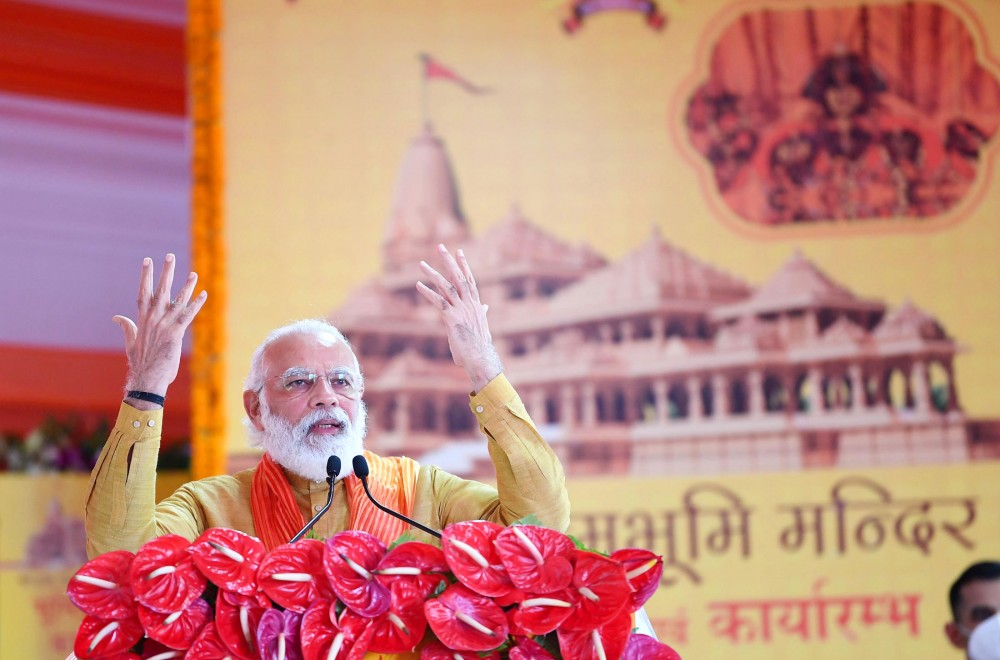 Ayodhya/New Delhi, August 5 (IANS): Ram Lalla and 'Vikas' were brought together in a fine interpretation of Lord Ram in the speech by Prime Minister Narendra Modi, on Wednesday after the 'Bhumi Pujan' ceremony in Ayodhya.

"Ram is for everyone, Ram is within everyone," he said, while addressing the seers after the 'Bhumi Pujan' of the Ram Temple in Ayodhya. Beginning his speech with "Jai Siya Ram" chants, Modi went on to link Lord Ram with modern times and said, "Lord Ram has shown us the path of realisation and research." He referred to the epitome of morals & dharma "Maryada Purushottam Ram" to stress on the observation of similar "maryada" (limits) in today's life. The Prime Minister exhorted citizens to follow a similar "maryada" in times of the Covid-19 pandemic by wearing masks and maintaining social distancing. "Ram speaks, thinks, according to time, place and circumstances. Ram teaches us to grow with time. Ram is in favor of change, Ram is in favor of modernity," said the Prime Minister.

He said that a grand temple will now be built for the Ram Lalla deity who had been living under a temporary tent for many years. "Every heart is illuminated; it is an emotional moment for the entire country... A long wait ends today," said the Prime Minister. The event sets the ball rolling for the construction of a grand Ram Temple, a key electoral promise of the ruling party.

However, the message the Prime Minister tried to drive home was larger. "This day is proof of the truth of the resolve of crores of devotees. This day is a unique gift of a just, fair India to truth, non-violence, faith and sacrifice," he said.

He said Ram is present in different cultures, in different areas. "Thousands of years ago, in the Ramayana of Valmiki, Lord Ram was guiding ancient India, in the Middle Ages, Ram was pushing India through Tulsi, Kabir and Nanak, the same Ram was present in Bapu's hymns as a force of non-violence and satyagraha during the freedom struggle," said the Prime Minister, while sending out a powerful message.

It was a speech, however, not without a subtle dig. He said, "Ram is carved in our mind, mixed with us. You see the amazing power of Lord Ram -- buildings were destroyed, every attempt was made to eradicate his existence. But he still remains in our mind."

But, at the end, the Prime Minister sent a larger message that Lord Ram stands for modernity, development and fairness and those are the aspects all Indians should aspire for, in the name of the deity, he suggested.