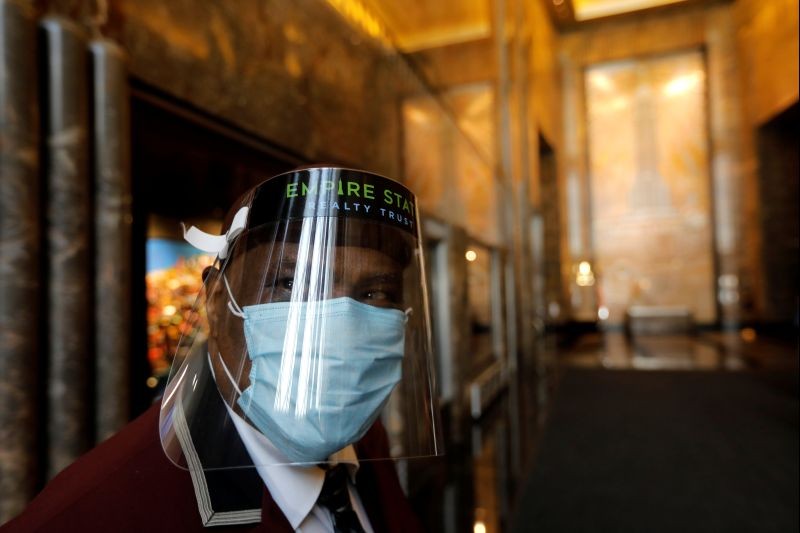 An employee wears a protective face mask and face shield in the main lobby of the Empire State Building in midtown Manhattan, as the iconic tower prepares to open to more tenants and visitors following the outbreak of the coronavirus disease (COVID-19) in New York City, New York, US on June 24, 2020. (REUTERS Photo)
World
29th June 2020

A daily surge in confirmed cases has been most pronounced in southern and western states that did not follow health officials' recommendations to wait for a steady decline in infections for two weeks before reopening their economies.

"That's a recipe for disaster," Anthony Fauci, who directs the National Institute of Allergy and Infectious Diseases, told CNN in an interview broadcast on Monday.

"Now we're seeing the consequences of community spread, which is even more difficult to contain than spread in a well-known physical location like a prison or nursing home or meatpacking place," Fauci told the cable channel in the interview, which was recorded on Friday.

More than 2.5 million people have tested positive for the coronavirus in the United States and more than 125,000 have died of COVID-19, the respiratory illness it causes, according to a Reuters tally. The U.S. tally is the highest in the world while the global death toll in the pandemic surpassed half a million people on Sunday.

California ordered some bars to close on Sunday, the first major rollback of efforts to reopen the economy in the most populous U.S. state, following Texas and Florida ordering the closure of all their bars on Friday. Arizona and Georgia are among 15 states that had record increases in cases last week.

U.S. Vice President Mike Pence on Sunday pressed Americans to adopt face masks during a trip to Texas and wore one himself, a sharp turnaround for the administration. Republican President Donald Trump has refused to cover his face in public.

Pence and other top health officials were expected to visit Arizona and Florida later this week.

In places where cases are soaring, U.S. health officials are also considering "completely blanketing these communities with tests," Fauci said, to try to get a better sense of an outbreak.

Fauci said that he was optimistic that a vaccine could be available by year's end but that it was unclear how effective it would prove to be, adding that no vaccine would be 100% effective and citing challenges to achieve so-called herd immunity.

The top Republican in the U.S. House of Representatives, Kevin McCarthy, on Monday stressed individual actions to stop the spread of the virus, deflecting criticism from Democrats and some health experts that Trump botched the prevention effort.