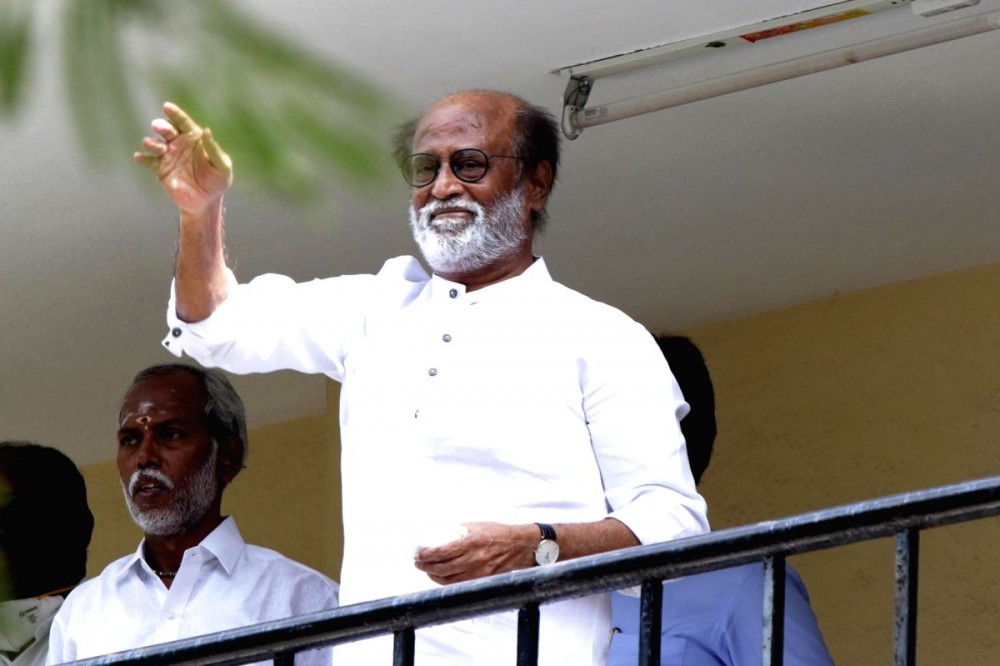 Actor Rajinikanth greets his fans assembled outside his Raghavendra Kalyana Mandapam, after holding a meeting with the District Secretaries of 'Rajini Makkal Mandram', in Chennai on November 30, 2020. (IANS File Photo)
India
3rd December 2020

Chennai, December 3 (IANS): Actor Rajinikanth on Thursday said he would float his political party in January and an announcement in that regard will be made on December 31, 2020.

With this Rajinikanth puts an end to various speculations about his plunge into Tamil Nadu politics.

Announcing this in a tweet he added: "In the upcoming assembly polls, with people's massive support, in Tamil Nadu, an honest, transparent corruption less, secular and spiritual politics is sure to happen."

"Miracle, Wonder will happen," he added.

On November 30 Rajinikanth told the District Secretaries of Rajini Makkal Mandram that he would announce his political plunge decision.

Speaking to reporters here, couple of District Secretaries said the actor had told them that he would decide on floating a political party and plunge into politics.

According to the Mandram officials, they also expressed concern at Rajinikanth's health condition and contesting the 2021 Tamil Nadu assembly polls will be the ideal time.

The meeting lasted for about two hours.

After the meeting he waved at the crowd assembled outside his Raghavendra Kalyana Mandapam sans mask and also mingled with the others without any hesitation.

It is also said Rajinikanth had told the District Secretaries that it is not possible for anyone to make money in politics with him.

Last month Rajinikanth tweeted that he would consult with the officials of Rajini Makkal Mandram his health condition and announce his political stance to the people.

At that time, denying a statement purported to be issued by him announcing his decision to quit politics Rajinikanth said some of the contents in that statement relating to his health and the medical advice given by the doctors were true.

"After discussing the matter with the officials of Rajini Makkal Mandram at an appropriate time will announce my political stance to the people," Rajinikanth had said.

As per the alleged statement, Rajinikanth's doctors had voiced out their reservations on his political entry since he had undergone a kidney transplant sometime back. Further there is no vaccine for Covid-19.

Further even if there is a vaccine, whether it would be effective at his age of 70.

The election for Tamil Nadu Assembly is slated in 2021.

As per the purported statement, if Rajinikanth had to start a political party then the plans would have to be finalised by December and announcement to be made in January 15th next year.

The condition of his health getting bad was also mentioned as he had to address rallies and meet people once he plunges into active politics during the Covid-19 period.

Asserting that he was not getting into politics for the sake of power, actor turned politician Rajinikanth in March this year ruled himself out of the race for the Tamil Nadu Chief Minister's post and said there was an urgent need for a change in the system.

He said that his political party and the government, in case it came to power, would have different leaders.

He said that 60-65 per cent of his party's candidate for the Tamil Nadu Assembly polls will be in the age group of 45-50. The remaining seats will go to "good people" in other parties, professionals, judges, and former IAS officers.

Recalling his speech on December 31, 2017, Rajini said that he was not into politics for power. At the age of 45 (in 1996) he was not interested in political power, and now at the age of 68 (in 2017) one cannot say he is power crazy, he recalled saying two years ago.

On December 31, 2017, Rajinikanth had announced his decision to float a political party to practice 'spiritual politics' and contest all 234 Assembly seats in Tamil Nadu in 2021.

The actor said at that time that his entry into politics was a "compulsion of time" since the country's politics had gone wrong.

Rajinikanth had remarked that while earlier kings would invade other countries and loot them, nowadays political parties were looting their own people under the guise of democracy. The system needs a change, he added.

After 2017, Rajinikanth has voiced his views on some issues. In the wake of anti-Sterlite Copper smelter plant protest in Tuticorin and killing of 13 persons in police firing, he said that Tamil Nadu would turn into a graveyard if protests were held for everything.

Later, he said that he was not a mouthpiece of the BJP and attempts were being made to paint him in saffron.