After euphoria and anxiety, Germans turn pragmatic on immigration - study 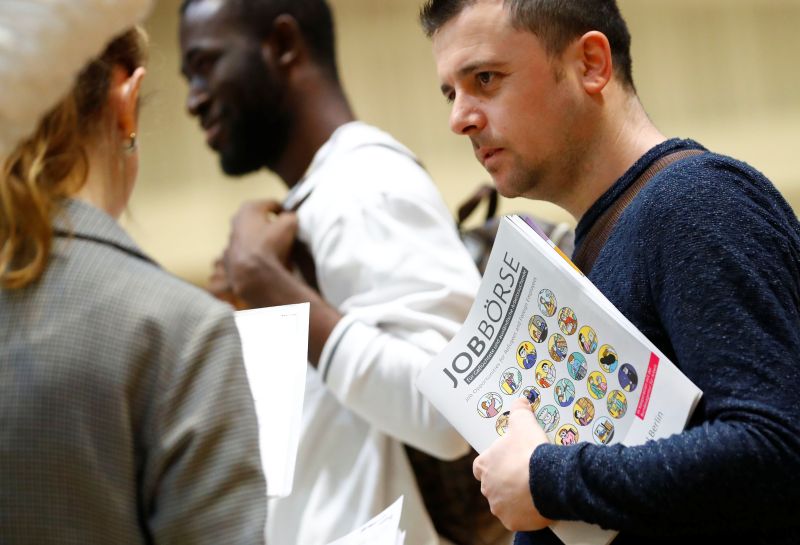 An exhibitor talks to visitors at a job fair for migrants to provide information about job opportunities all over the country in Berlin, Germany on January 28, 2019. (REUTERS File Photo)

BERLIN, August 29 (Reuters): Germans are broadly positive towards immigration and think it benefits the country, a survey showed, suggesting the often extreme reactions triggered by the arrival of a million-plus refugees there in 2015 have given way to a calmer view.

Overall, almost two thirds of Germans believe immigration is good for the economy and 67% that it makes life more interesting, with young people the most positive.

"Germany has passed the stress test of the 2015 immigration wave and has stabilized itself as a pragmatic immigrant country," foundation board member Joerg Draeger said.

"The population sees the challenges, but also the opportunities it brings for an ageing society."

Four years ago, Chancellor Angela Merkel chose to leave Germany's borders open as an unprecedented wave of migrants, many of them fleeing war in Syria, headed for Europe.

While many greeted Merkel's decision with initial euphoria, a backlash followed, with a jump in support for anti-immigration parties across Europe, one of which, the Alternative for Germany (AfD), entered parliament in 2017 for the first time.

While a sense of unease remains, the intensity of feeling has diminished. Some 49% still think Germany is overburdened with refugees, but that has declined from 54% since 2017.

Some of the divisions between east and west have also narrowed.

A total of 59% of western Germans said refugees were welcome, down from 65% in 2017, while the comparable figure in the poorer east rose to 42% from 33%, the survey showed.

However, as many as 83% in the east - where the AfD is expected to do well in two regional elections on Sunday - still feel immigration is a burden on the welfare state and just a slender majority think it good for the economy.