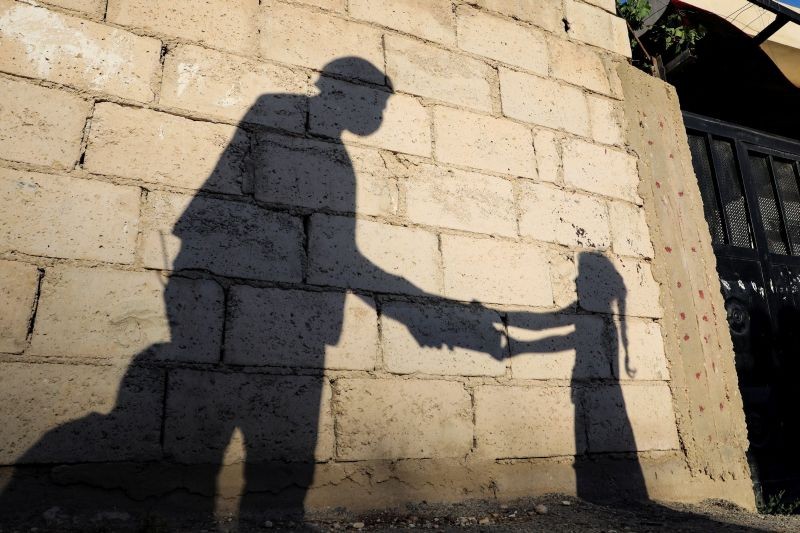 The shadow of a girl receiving a meal for iftar, or the evening meal, to break fast from a member of "Tkiyet Um Ali" humanitarian services center is cast on a wall in front of her family home in the city of Russeifa, during the holy fasting month of Ramadan, amid concerns over the spread of coronavirus disease (COVID-19), in Jordan on April 28, 2020. (REUTERS File Photo)
World
14th July 2020

Organisations globally are facing pressure from staff to do more to confront racism amid global protests sparked by the death of George Floyd in police custody in the United States.

The Thomson Reuters Foundation asked 24 non-government organisations (NGOs), charities and United Nations agencies how many racism complaints they received in the past year, and if staff had faced disciplinary action in the past five years.

Seven would not respond to questions or share data, a further eight said they had received no reports of racism against employees over the last year, while four said it was not possible to obtain clear data.

Only five organisations confirmed they had dealt with racism complaints and provided numbers.

Aid workers campaigning against racism said they did not believe the numbers reflected the true extent of the issue.

"Just because it's not reported in the data does not mean it's not happening", said Angela Bruce-Raeburn, a campaigner against racism in aid and regional advocacy director for Africa at the Global Health Advocacy Incubator.

"If we are saying that we are doing humanitarian work ... and we want to be true to our mission, then we have to know when there's abuse, we have to seek out information about it, and then we have to do something about it."

With many humanitarian groups based in wealthy nations and working in poor and vulnerable communities in the global South, experts have warned power disparities create a risk of abuse.

Demands for aid agencies to be more transparent have mounted since it emerged in 2018 that Oxfam staff had used prostitutes during a relief mission in Haiti, sparking a wider discussion over sexual harassment and abuse in aid.

Medical charity Medecins Sans Frontieres (MSF) said it received seven complaints about racism from field projects in 2019 - fewer than five of which were upheld - but did not think this gave the complete picture.

"We know we face a problem of under-reporting of abuse and behaviour issues, especially in terms of complaints made by locally-hired staff, patients and their carers," said an MSF spokesman. "We are making efforts to address that."

The Danish Refugee Council said a search for the keyword racism brought up 11 complaints since 2016. Of these, one was investigated as potential serious misconduct but was not proven.

The International Committee of the Red Cross said it dealt with 11 cases of alleged racism through its global compliance office since 2017, of which two were substantiated, with the rest dismissed, resolved, or have investigations still ongoing.

It added that although no formal complaints had been received from those who received aid "we should acknowledge that power imbalances between ICRC staff and the people we assist may exist and could serve as a barrier".

The United Nations Refugee Agency UNHCR said one staff member was "separated for a range of misconduct" within the last five years, and two other disciplinary cases were ongoing.

Mercy Corps said it received three complaints alleging racism among staff in the past year, and a further three reports of tribal or ethnic-based discrimination.

A third of organisations polled said they had no records of racism complaints made against staff in the past year.

Racism exists within the United Nations, Secretary General Antonio Guterres told staff last month, as he called for "an honest conversation" and a greater focus on tackling the issue.

The Norwegian Refugee Council also said it had no reports of racism against staff via its global whistleblowing mechanism but could not exclude the possibility cases were dealt with locally.

Oxfam International and CARE International both said they did not hold data at a global level as cases were dealt with by member organisations individually.

Save the Children International and World Vision International said they could not obtain figures as their global recording systems did not separate complaints of racism from other alleged discrimination or misconduct.

"We are committed to tracking this information more effectively going forwards, whilst recognising that some cases ... may not always be identified or reported as such," said a spokeswoman for Save the Children International.

World Vision International also said it was working on plans to better track racism complaints where local laws and legislation allow this.

"We do not tolerate racism in our workplace. No context is immune to racism, and we are not complacent," said Andrew Morley, president of World Vision International.

Several other agencies noted they did not track racism complaints as a specific category or that issues may have been dealt with at lower-levels.

"What we are seeing shows that everyone can do better," said Mohammed Ali, the programmes director at aid training and project support organisation Aid Works and a campaigner against racism in humanitarian operations.

The number of formally reported cases likely represented only the "tip of the iceberg" of racial discrimination, he said, adding, "little discriminations that happen all the time are not going to get captured by systems like this."

Among those which did not answer questions about the number of racism complaints or declined take part in the poll were Christian Aid, Food for the Hungry, the International Rescue Committee (IRC) and Plan International.

"We take complaints of discrimination seriously and immediately investigate them," said an IRC spokeswoman, adding it did not share details of investigations but has taken disciplinary action for violations of its code of conduct.

"We value diversity as a strength and are committed to becoming an anti-racist organisation," said Christian Aid chief executive Amanda Khozi Mukwashi in a statement, saying they have appointed external consultants to assess its systems.

Compassion International said it considered workplace complaints to be internal matters and would not share details due to confidentiality concerns.

Two other organisations, Caritas Internationalis and International Medical Corps, made no response to the poll.

"We need to get this right because it underpins every area we work in," said Lena Bheeroo, the lead on equity, diversity and inclusion work at UK international development network Bond and a committee member of the #CharitySoWhite campaign group.

Organisations failing to monitor racism cases effectively from the top "means they are just perpetuating the problem".

"If you are not addressing it at the highest levels, then you are being complicit," Bheeroo said.