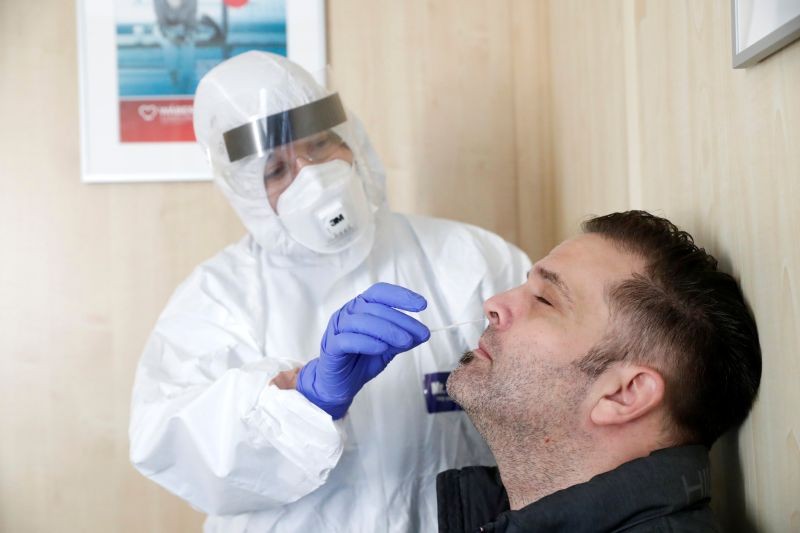 A healthcare worker collects a swab sample from a man at a COVID-19 testing site as the spread of the coronavirus disease (COVID-19) continues in Budapest, Hungary, October 27, 2020. (REUTERS Photo)
World
27th October 2020

ROME, October 27 (Reuters): European governments prepared on Tuesday to introduce new restrictions to try to curb a growing surge of coronavirus infections across the continent and provide economic balm to help businesses survive the pandemic.

Eight months into the crisis, world leaders face an increasingly difficult task holding the disease at bay while also trying to keep their economies afloat as they wait for a vaccination that should mitigate the contagion.

The United States, Russia, France and other countries have registered record numbers of infections in recent days as autumn turns to winter in the Northern Hemisphere and people congregate indoors where the risk of infection grows.

Hundreds of protesters took to the streets across Italy on Monday to vent their anger at the latest round of restrictions, including early closing for bars and restaurants, with demonstrations in some cities turning violent.

In the financial capital Milan, youths hurled Molotov cocktails at police, who responded with volleys of tear gas. In nearby Turin, luxury shops had their windows smashed and some were ransacked, leading to the arrest of 10 rioters.

Looking to calm frayed nerves, Prime Minister Giuseppe Conte was expected to approve later in the day measures to help companies hit by the new curbs introduced at the weekend after daily infections increased eight-fold in less than a month.

In neighbouring France, Interior Minister Gerald Darmanin warned the country to prepare for "difficult decisions" after some of the strictest restrictions currently in place anywhere in Europe have failed to halt the spread of the disease.

A top World Health Organization official said on Monday that Europe needed a "serious acceleration" in the fight against the coronavirus, saying a lack of contact-tracing capacity could drive the disease into the darkness.

Authorities in Russia, which with 1.55 million infections has the world's fourth largest COVID-19 case load, ordered people across the country on Tuesday to wear facemasks in some public places and asked regional authorities to consider shutting bars and restaurants overnight to counter the virus.

Even Germany, widely praised for its initial response to the pandemic, signalled concern on Tuesday over rising infections, with Economy Minister Peter Altmaier saying the country was likely to reach 20,000 cases a day by the end of this week.

Altmaier said the Europe-wide epidemic would make it harder for economic growth to rebound as quickly as previously hoped.

Adding to the gloomy sentiment, a new study by Imperial College London found that antibodies against the new coronavirus declined rapidly in the British population during summer, suggesting protection after infection may not be long-lasting.

With state finances creaking under the weight of the crisis, Spain's government said on Tuesday it planned to raise taxes on large companies and wealthy people to fund increased spending on social care and infrastructure.

While Europe is struggling to contain the coronavirus, Asian countries appear to be doing a better job.

Hong Kong announced it would reopen public beaches and increase the number of people allowed to sit together in bars and restaurants starting Friday as the city continues to unwind strict COVID-19 rules put in place in July.

"The epidemic situation has continued to subside over the past two weeks," Sophia Chan, the Chinese special administrative region's health secretary, told reporters.