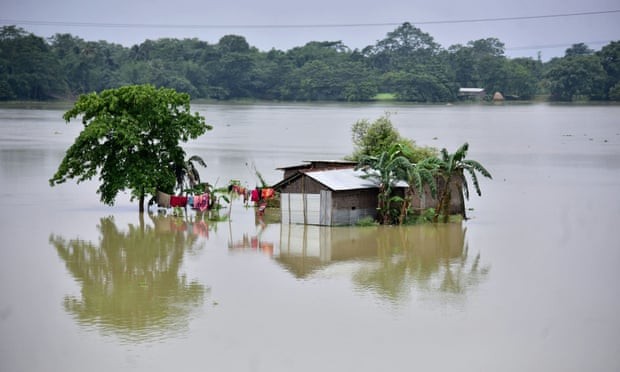 A partially submerged house is seen at the flood-affected Mayong village in Morigaon district, in the northeastern state of Assam, India on 29 June. (Reuters/Anuwar Hazarika Photo)
North-East
1st July 2020

Guwahati, July 1 (IANS):  The ongoing wave of floods in Assam, triggered by the monsoon rains, claimed six more lives on Wednesday, taking the death toll to 33, besides affecting around 15 lakh people in 21 of the state's 33 districts, officials said.

The Assam State Disaster Management Authority (ASDMA) officials said that in the current wave of floods since early last week, 18 persons have died in Dhubri, Nagaon, Nalbari, Barpeta, Dhemaji, Udalguri, Goalpara and Dibrugarh districts, taking the state's death toll to 33, while 24 people have been killed in separate landslides since May 22.

"Around 15 lakh people in 2,197 villages were distressed by the floods and over 87,018 hectares of crop areas were severely affected due to the floods. Around 25,461 people, including women and children, took shelter in 254 relief camps," an ASDMA official said.