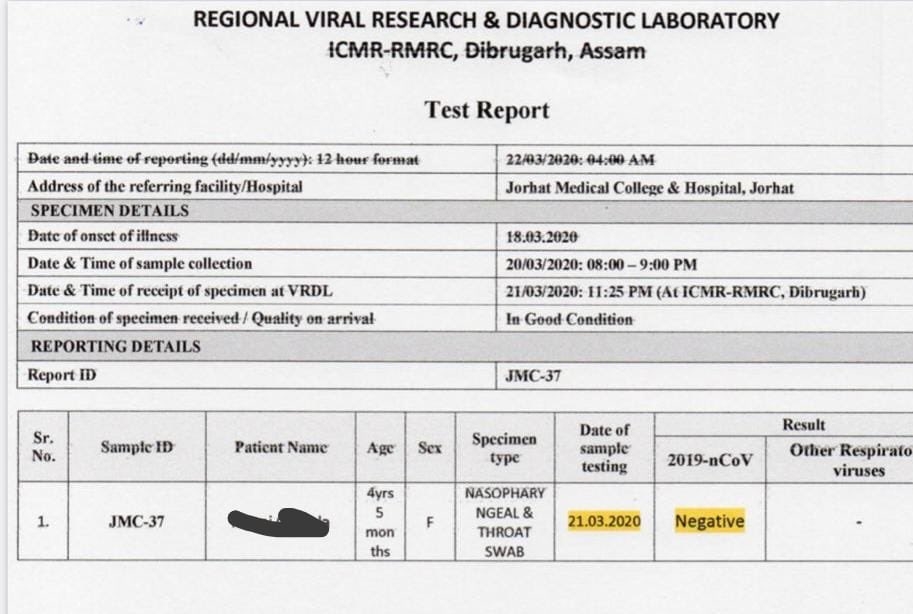 The 4 year old child who was suspected of covid-19 has been found NEGATIVE. There is no positive case in Assam so far, Assam Health Minister Himanta Biswa Sarma tweeted on Sunday.  (Photo Courtesy: @himantabiswa/Twitter)

Dimapur, March 21 (MExN): The 4-year-old child who was suspected of COVID 19 after testing positive at Jorhat Medical College and Hospital (JMCH) on March 21 has been found to be negative during a recheck.

Sharing the information on Sunday on micro blogging site Twitter, Assam Health Minister Dr Himanta Biswa Sarma tweeted: “The 4 year old child who was suspected of covid19 and tested in Jorhat Medical College and RMRC, Dibrugarh has been found NEGATIVE. There is no Covid19 positive case in Assam so far.”

According to a PTI report on Saturday, the girl tested positive at JMCH on Saturday however, samples has been sent the Regional Medical Research Center, Dibrugarh, another Indian Council of Medical Research’s (ICMR) designated testing centre in Assam for re-check and reconfirmation.

The girl and her family had come from Bihar on March 19 and the girl was admitted to JMCH after she exhibited the symptoms of Coronavirus on Friday.

Meanwhile, according to the Ministry of Health and Family Welfare (MoHFW) update on COVID-19, the total number of confirmed cases so far in the country in the afternoon of March 22 was 341.

As per the status on 2:30 PM on Sunday, out of the total cases, there were 23 Cured/discharged cases while death toll stood at 5.