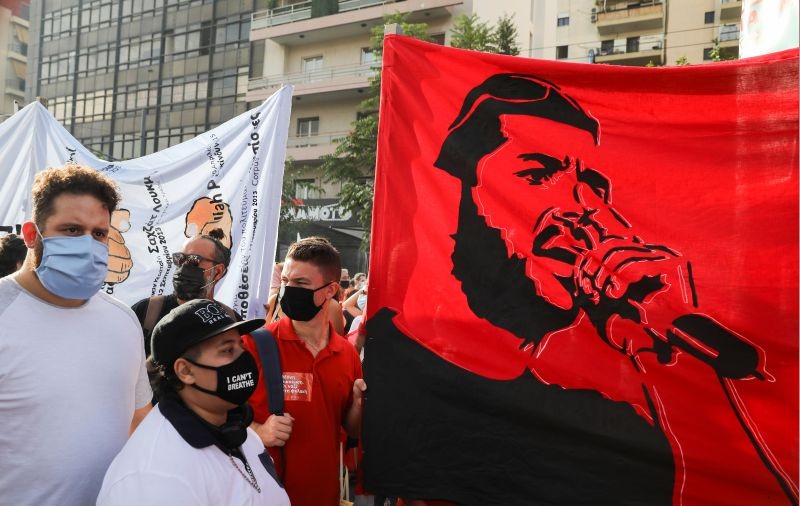 A banner depicting anti-racist Greek rapper Pavlos Fyssas is seen, as demonstrators protest ahead of a trial of leaders and members of the far-right Golden Dawn, in Athens, Greece on October 7, 2020. (REUTERS Photo)

ATHENS, October 7 (Reuters): Thousands of people converged on Greece's main appeals court on Wednesday ahead of a ruling on whether the country's far-right Golden Dawn party was a criminal group.

Holding banners - some of which read "Crack down on the Nazis" - a sea of people surrounded the building in Athens, where a three-bench court was due to start reading out its verdict around 0800 GMT, the culmination of a trial which started in 2015.

Golden Dawn leader Nikos Mihaloliakos and more than a dozen party members were arrested on charges of founding and participating in a criminal group following the killing of an anti-fascism rapper in 2013 by a party supporter.

The party denied the allegations and says the defendants are victims of a political witch-hunt.

The killing sparked nationwide protests and prompted a government-led crackdown on the fiercely anti-immigrant party, which entered parliament for the first time in 2012 by tapping into voter anger at Greece’s economic crisis.

Its anti-austerity and anti-immigrant agenda made it Greece's third-most popular party at the peak of the country's worst financial crisis since World War II. It lost its parliamentary seats in an election last year.

The killing seven years ago of 34-year old Pavlos Fyssas by a party supporter prompted a crackdown against the party that led prosecutors to arrest and investigate Golden Dawn leaders and lawmakers over a series of crimes.

"They are not innocent, they must go to jail, they must be convicted," said a 69-year old demonstrator outside the court who gave her name as Sophia. "We must send a message to the younger generations, a message against fascism," she said.