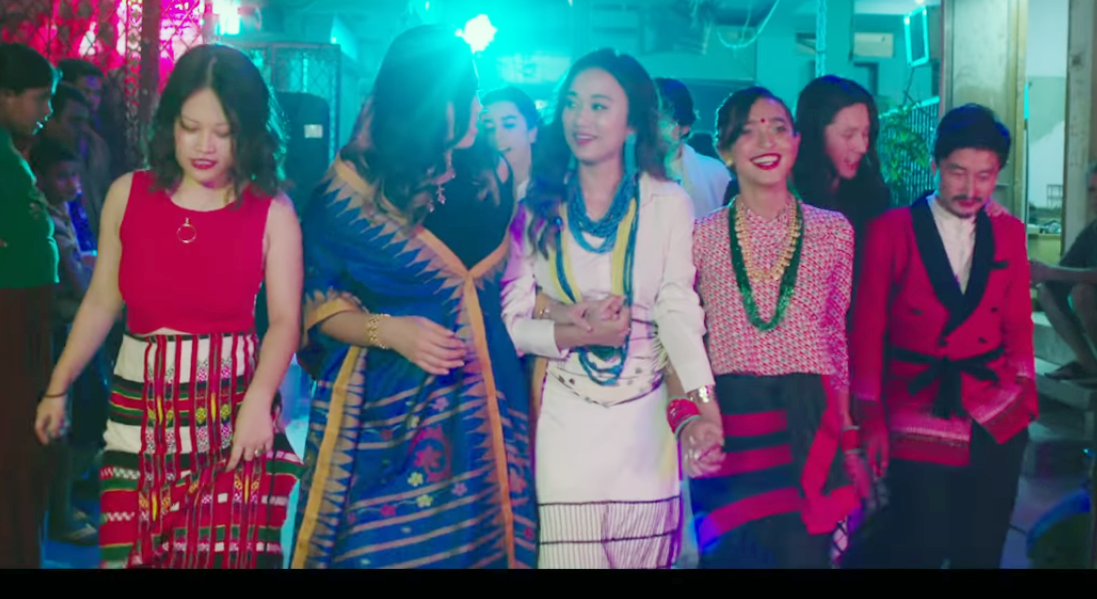 Screengrabs from movie trailer of ‘Axone’ written and directed by Nicholas Kharkongor. The 96-minute feature, dealing with experiences of North Easterner in major cities outside the region, is slated to screen at the prestigious 63rd BFI London Film Festival to be held from October 2-13. (Photo screengrabs: BFI/Youtube)

A decade ago, a section of Delhi police issued a booklet titled, “Security Tips for northeast students/ visitors in Delhi.” Among others, tips were given on how food items like “bamboo shoot, Akhuni (Axone) and other smelly dishes,’ should be prepared without creating ruckus in neighbourhood.  Certain dress codes and other etiquette, especially for women were also suggested.

Bamboo shoots feature in most cuisines of the region, however, the akhuni, made from fermented soya beans, is basically a Naga fare; though most in the region have ‘acquired taste’ for the delicacy. These foods along with ‘fermented fish’ are cause of many bittersweet experiences for the people from the region, staying outside.

The ‘well-intended’ tips caused consternation in many circles for being "insensitive," but in a nutshell highlighted the typical experience of North Easterner’s sojourn to cities in so-called ‘mainland’ India.

The national capital being most cited, by the virtue of being the most frequented destination, for travel as well as studies and works.

‘The recipe for disaster’
Enters ‘Axone,’ a movie based on this situation, the predication of being crammed between the craving to taste the ‘recipe for disaster’ on one end,  and the prying ‘inquisitor’ at the other end, often taking it as a pretext to intervene on other issues.

Written and Directed by Nicholas Kharkongor, the 96-minute feature is slated to screen at the prestigious 63rd BFI London Film Festival to be held from October 2-13.

A total 229 feature films from some of the “world’s greatest filmmakers and emerging talent” will be screened at the 12-day festival organised by the British Film Institute (BFI),  UK’s lead organisation for film, television and the moving image.

A line-up in the ‘Laugh Strand’ part of the festival, ‘Axone’ is described as a ‘bittersweet’ comedy telling the story of groups of immigrants in Delhi attempting to organise a wedding party, likening it to ‘My Big Fat Greek Wedding.’

“With the challenges brought on by cultural difference and the pressures of being immigrants in a seemingly unfriendly city, is food and love enough to save the day?”

A wedding, a feast, a landlord-tenant clash —the quintessential Northeastern experience in the big city, wrote Tora Agarwala in a review in The India Express in May, 2019.

The film explores the travails of this young group of buddies, as they grapple with outright racism and the upheavals of their interpersonal relationships, throughout the course of an eventful day!

Expectedly, the BFI trailer is trending in several social media platform in Nagaland for ‘familiarity.’

Produced by Yoodlee Films, a division of Saregama India, the film with Sayani Gupta, Vinay Pathak, Dolly Ahluwalia, Tenzin Dalha and Lin Laishram in the lead roles, was reportedly shot over 24 days in a blistering Delhi June.

Naga Connection
Apart the title, the film have other association with the Nagas.

The writer director spent the first 14 years of his life in Mokokchung, Nagaland.

In an interview to RAIOT, a webzine from Meghalaya, Kharkongor informed that he studied till Class 10 in Mokokchung and moved to Shillong for higher studies graduating from St Edmunds’ College. Later he went to Delhi and started doing theatre.

Besides a credit-roll for Lanuakum Ao, another performer from Nagaland, Merenla Imsong is also featured prominently on the BFI trailer.

Kharkongor’s career
Kharkongor has worked extensively in theatre and film for 20 years. His plays have been performed in India and abroad, including in London and New York, stated description by Yoodlee Films, the producer of Axone.

He first directed a short movie called ‘Fair and Lowly’ in 2012 – dealing with a serious issue in a lighter vein  on India’s craze behind fairness cream ads.  But the big break came in 2016 when Kharkongor directed ‘Mantra,” entirely “crowdfunded” according the Hindustan Times.

Set in 2004, in the midst of a nationwide 'India Shining' campaign, Mantra narrated the intimate story of a family and its travails, and through it, the story of the New India.

Did the group of friends manage to find a place to cook the delicacy?  The lingering shoot with ‘Butter Chicken’ dialogue at a ‘familiar’ location at the end of the trailer might give a clue. 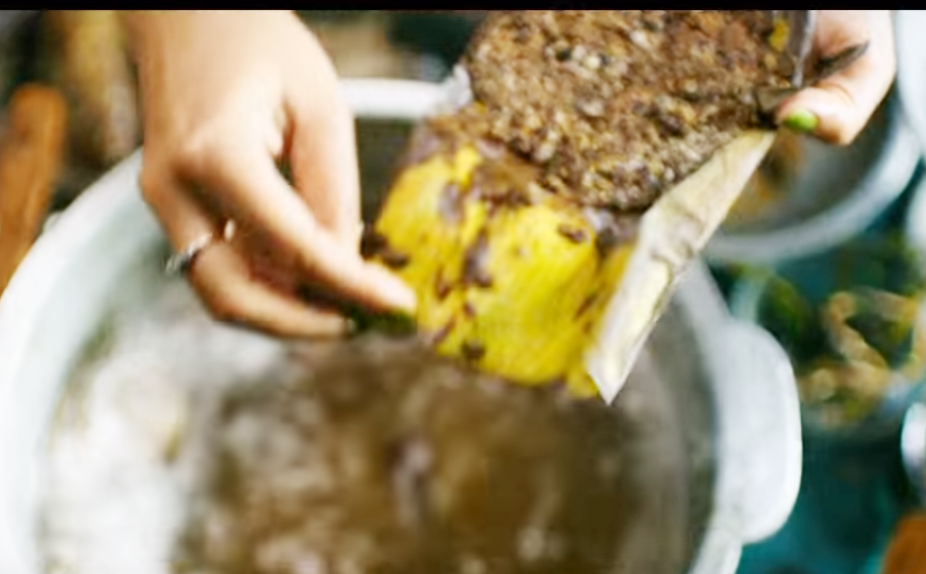 What are your ‘food’ cooking experiences outside Nagaland?

With the trailer of ‘Axone’ – the film based on a Naga’s favourite delicacy generating huge buzz across various social media platforms especially in Nagaland, The Morung Express compiled a few responses on social media as well as comments from readers regarding the issue.   Here are some experiences:

New Delhi:
“Ah! I remember using newspaper as extra additional cover along with the utensil lid to cut the smell though we knew it’s not hygienic. But that was never enough, always had a few residents passing our corridor covering their mouths and giving us the look!” – Therila.

“First flat in Lajpat Nagar! The land lady was sweet. If we were planning to cook axone, she would tell us to call her and inform so that she could shut all her doors and windows. She resided the floor below us. It seems she was accustomed to Axone from before but never got used to the smell.”

“Second flat: Danger!  Landlord lived elsewhere...but the neighbour was quite a pesky old lady. She collected so many people outside our door once and harassed us. We never cooked axone or dry fish in that flat. The next stop in Safdarjung area was cool.”

In another incident, when we were cooking at a friend’s house, a guy came sniffing and asked an acquaintance later– Your colony drain is open or what? - Yimshen

South India
“During my student days in South India, and staying in rented accommodation, I remember this one incident where my immediate neighbour on one particular day knocked on my door. And it wasn’t to pop in for a hello and some tea. I was cooking our beloved bamboo shoot and roasting dried fish for the chutney. Well, now you can figure out the purpose behind the visit. Fortunately, she was quite understanding about the whole “stench.’ In fact, curiosity got the better of her and she ended up tasting the fare which I was preparing. Long story short, there were no more complaints and she became a frequent visitor during dinner time!  - Imchala

Comments from The Naga Blog
“Brings back my Delhi memories. My friend who had recently returned after vacationing back home was cooking dried pork in Axone in the middle of the night only to be kicked out by his landlord. Came with his roommate, dressed only in their boxer shorts and vests, laden with all their belongings to our flat with the help of some scrawny auto driver. The landlord didn't even allow them to change their clothes, My roommate and I laughed our lungs out while that scrawny autowalla was like "Bhaiya samaan kahaa rakhna hai?" while my chased out friend stood there sweating profusely with his suitcase on his head... The power of Axone- Michael Rudy Stm

“Reminds me of my days in Delhi where I had this Punjabi lady neighbour whose kitchen was just opposite to my rented apartment's kitchen. Imagine the horror I used to go through every time I cook fermented home food but thankfully my landlady who was also a Punjabi was the sweetest person on earth.” Can't wait to watch all the reality shown in a movie- Florence Dora