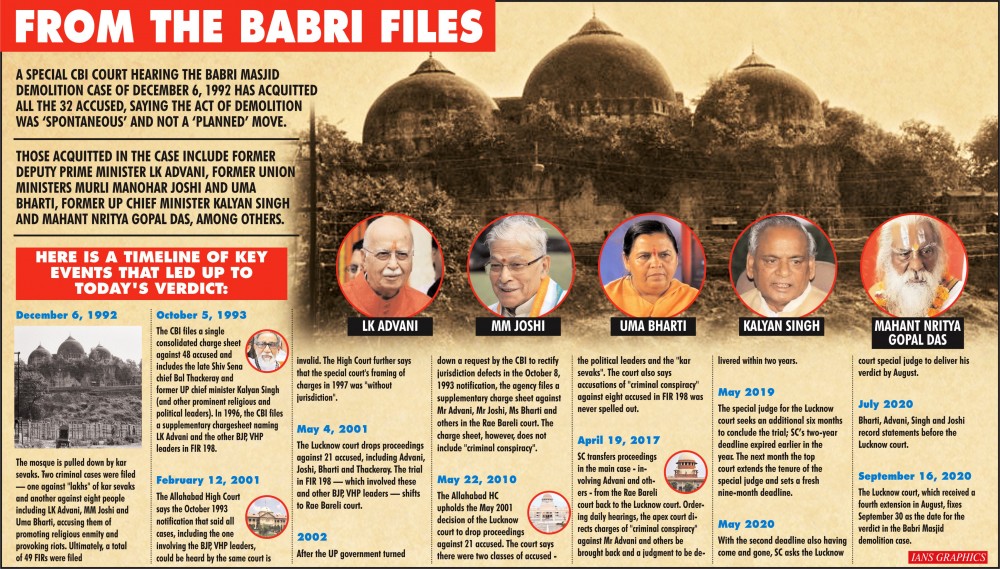 Lucknow, September 30 (IANS): A Special CBI court hearing the Babri mosque demolition case of December 6, 1992, acquitted all the 32 accused on Wednesday saying it was spontaneous and not a planned move.

As soon as the court announced the acquittal of the accused, jubilation broke out outside the court, in Ayodhya and Lucknow where supporters of the leaders were present to celebrate the occasion.

Special CBI judge S.K. Yadav, in his verdict, said that the demotion was not a planned incident but a spontaneous act.

He said that Ashok Singhal and other Sangh Parivar leaders wanted to save the structure as Ram Lalla statues were inside.

The court observed that leaders who were present on the dais repeatedly tried to persuade the 'kar sewaks' against taking any action on that day.

The court further said the CBI has failed to substantiate the charges levelled against the 32 accused persons. The court also said that the video recordings submitted to the court were 'tampered with'.

The judge pointed out that the prosecution could not produce enough evidence against the accused.

He said that the authenticity of audio, video provided by CBI could not be proven and the audio of the speeches were not clear.

The court also said that those who climbed on the dome, were anti-social elements.

The 26 accused persons who were present in court on Wednesday, said that they had always maintained that the demotion was a conspiracy by the then Congress government.

Babri plaintiff, Iqbal Ansari, said in Ayodhya that after the Supreme Court ruled in favour of the Ram temple last year, the demolition case had lost its relevance.

"I welcome acquittal of the 32 persons by the court. There should be no further dispute on the matter," he said.

Lal Krishna Advani , who spearheaded the Ayodhya movement, on Wednesday hailed the acquittal of 32 accused, including him, by a special CBI court in December 6, 1992 Babri mosque demolition case.

Advani, who appeared in the court through video conferencing, welcomed the court order and said, "The judgment vindicates my personal and BJP's belief and commitment towards the Ram Janmabhoomi movement."

"I am grateful to my party workers, leaders, saints, and all those through selfless involvement and sacrifices gave me strength and support during the Ayodhya movement," Advani said in a statement.

He also thanked the party leaders, seers and his legal team for the joint efforts, which led to the foundation laying ceremony in Ayodhya for the temple. He said he looks forward to the construction of a grand and beautiful Ram Temple.