Central govt only concerned about the rich and powerful: Priyanka 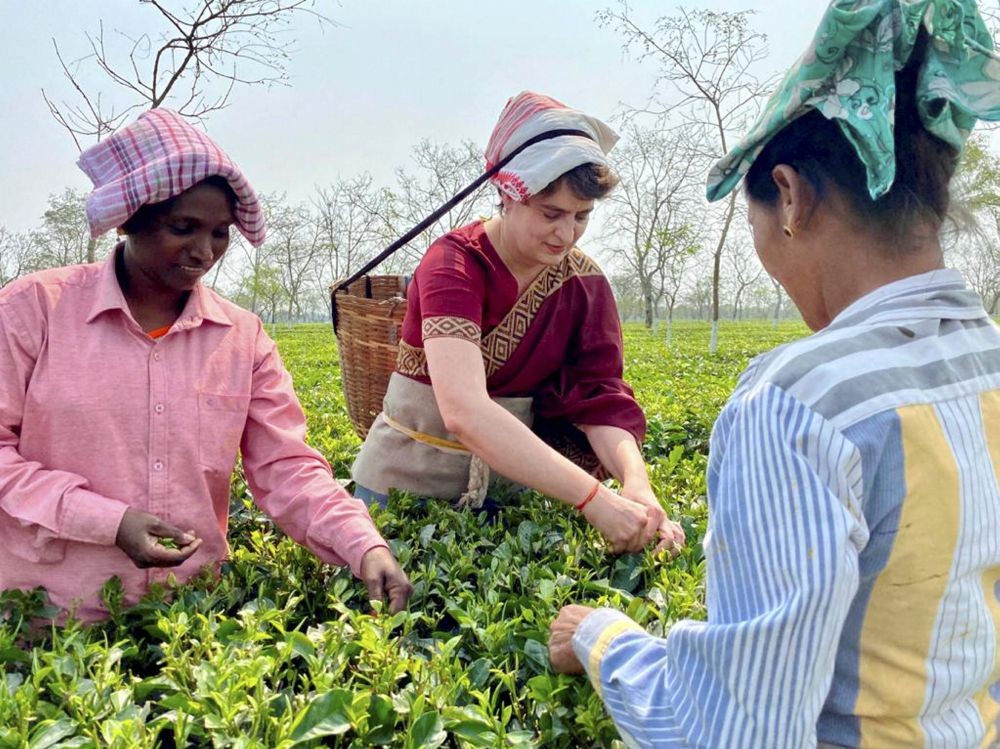 Bishwanath (Assam), March 2 (PTI) Congress general Secretary Priyanka Gandhi Vadra on Tuesday slammed the BJP-led government at the Centre for not paying heed to farmers' concerns over the new agricultural laws, and said its policies are designed to benefit only the rich.

Interacting with women workers of the Sadharu Tea Estate near here, she said farmers have been protesting in and around the national capital for months, but Prime Minister Narendra Modi is yet to meet them and end the impasse. 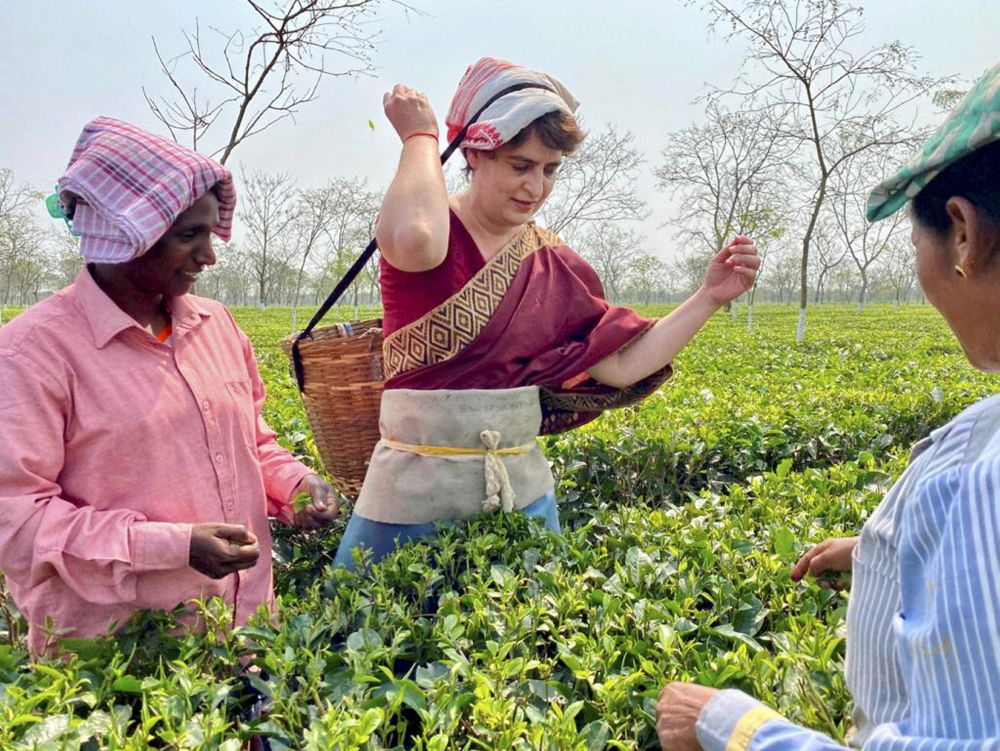 "More than three lakh farmers are sitting on a dharna for the last two months, barely four to five kilometres away from where the PM stays, but he has not gone to meet them.

"What is the problem if he goes to meet them once, talk and if the farmers have a problem with the laws, then make changes for their benefit... but the policies of this government is for the rich and powerful and not for the common people," the Congress leader said. 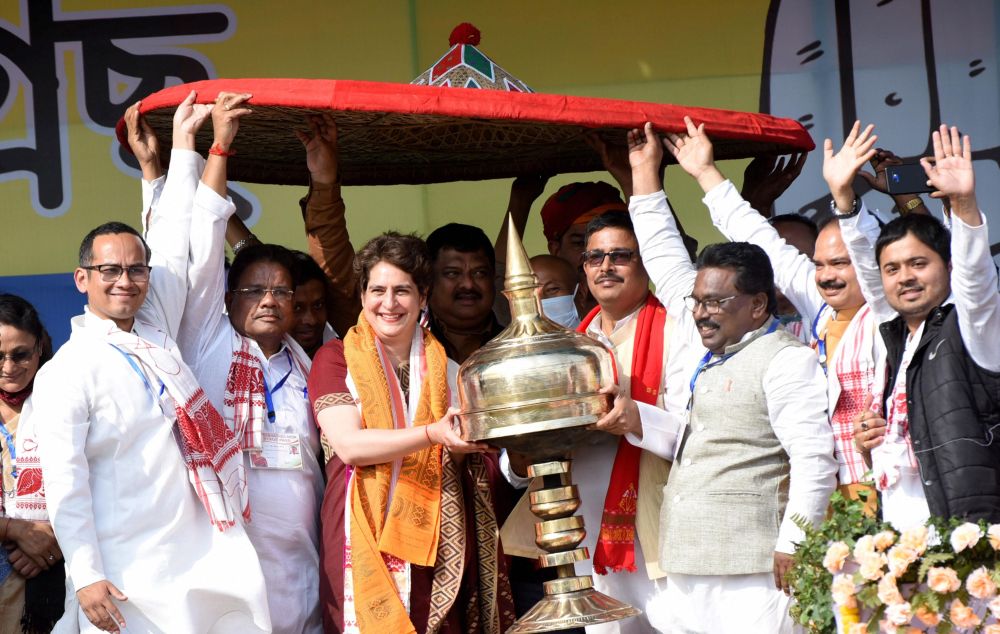 Tezpur: AICC General Secretary Priyanka Gandhi Vadra being felicitated with a traditional 'japi' and 'xorai' by President of Assam Pradesh Congress Committee (APCC) Ripon Bora and others, during a rally for the forthcoming state assembly elections, at Tezpur in Sonitpur district, Tuesday, March 2, 2021. (PTI Photo)

Gandhi, who is on a two-day visit to poll-bound Assam, sat with the women workers in the tea garden and discussed with them a host of issues.

During the interaction, the women reportedly told her that only a few get benefits of the schemes meant for them, but the others have to frequently visit government offices to enquire, which is not feasible during work hours.

They also highlighted the problems due to price rise, housing and lack of toilet facilities in the gardens.

"It is the 'dharma' of the parties to fulfil the promises made by them when they visit you during elections. 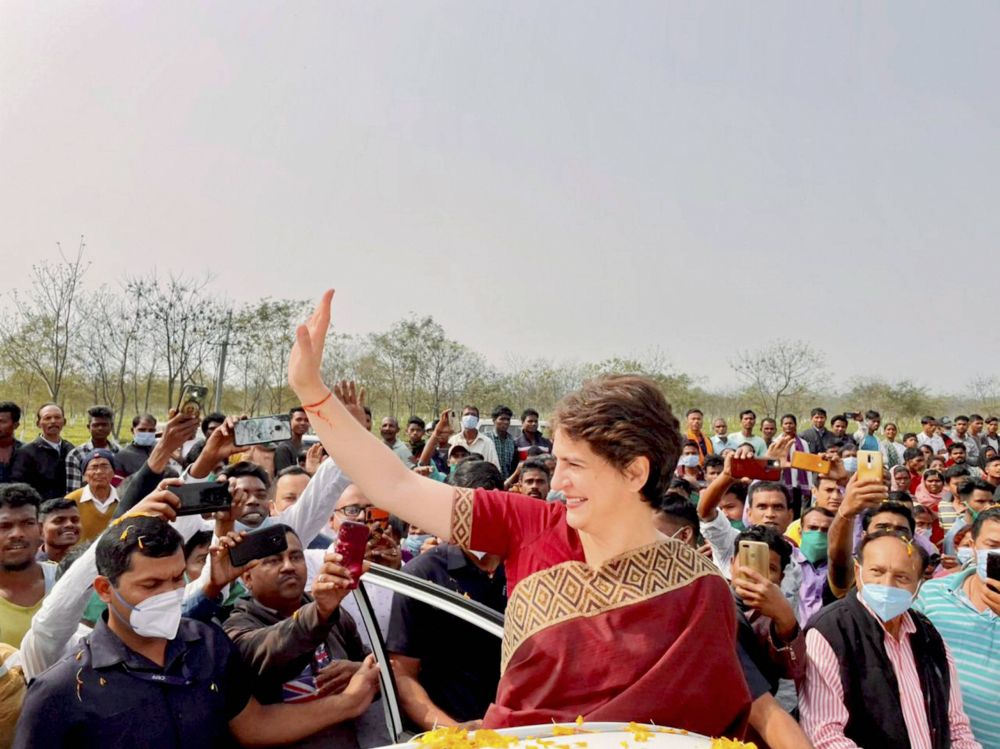 You have the power to vote and teach a lesson to the government which does not keep its words. We have promised Rs 365 as minimum daily wages..." the Congress leader told the women workers.

Gandhi, clad in a traditional 'mekhla chador' for the second consecutive day, was seen putting on a tea-plucking basket on her back and going round the gardens.

She also attempted a few steps of 'jhumur', the folk dance of the tea tribe community, and was gifted the white and red bordered saree which the women wear while dancing.

The Congress leader then visited the home of a tea garden worker.

Elections to 126 assembly constituencies in the state will be held in three phases on March 27, April 1 and April 6.