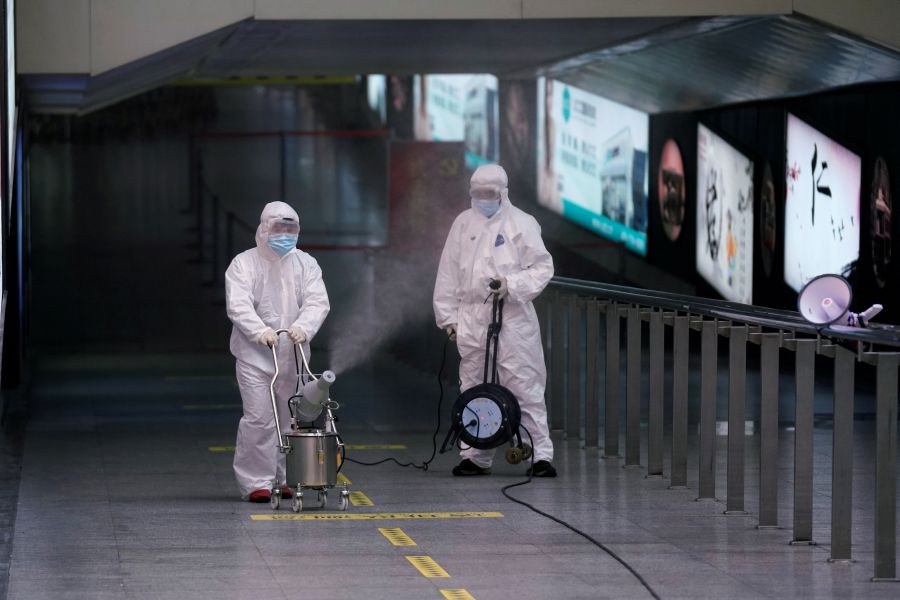 Workers with sanitizing equipment disinfect at the Shanghai railway station in Shanghai, China, as the country is hit by an outbreak of a new coronavirus on February 27. (REUTERS Photo)

SHANGHAI/BEIJING, February 27 (Reuters): China reported 433 new cases of coronavirus infections on Feb. 26, the National Health Commission said on Thursday, up from 406 a day earlier, with a cluster of new cases in Beijing raising concerns about the management of employees returning to work.

The total number of confirmed cases on mainland China has now reached 78,497, the Commission said, though the number of new deaths on Wednesday stood at 29, the lowest daily rate since Jan. 28.

The outbreak has now killed a total of 2,744 people in China.

Hubei, the central Chinese province at the epicentre of the outbreak, reported 409 new cases and 26 deaths on Wednesday. Beijing and the provinces of Heilongjiang and Henan were the locations of the other three fatalities.

The number of new cases outside Hubei stood at 24, up from 5 on the previous day and reversing five days of declines. Ten of those were in Beijing.

A statement published by the Comission on Thursday, citing a meeting held the previous day, said that the situation in Hubei province and Wuhan is "still complex and serious", and added that the risk of a rebound in infection in other regions should not be overlooked.

Also, some coronavirus patients discharged from hospitals after recovery have been readmitted after testing positive again, health authorities said recently.

A health official in southern Guangdong province told state media on Wednesday that 14% of patients discharged from hospital experienced a resurgence of the virus, although they had not infected any others they had been in close contact with.

The number of new confirmed coronavirus cases in Beijing on Feb. 26 had jumped to 10 from zero the previous day. Pang Xinghuo, deputy head of Beijing Centre of Disease Control, told a news briefing on Thursday that it was a cluster case.

The new cases all stemmed from a property management agency in Beijing's Chaoyang district, and had either been working in the same office or sharing the same dormitory, Pang said.

The case showed that companies were not putting in place adequate monitoring of staff during their 14-day quarantine period, Chen Bei, deputy secretary general of Beijing city government, told a briefing later on Thursday.

It has also highlighted the risks of crowded dormitories and poorly ventilated basement housing often used for some workers.

Chen said no more than six people should share basement dormitories, which should have windows. She also reiterated that people returning to Beijing must undergo a 14-day self quarantine before they're allowed to go back to work.

Chinese authorities are also turning their attention to potential sources of infection from abroad, as the number of new cases outside China now exceed those domestically.

The Shanghai government said it is trying to identify anyone who came into contact with a coronavirus patient who arrived in the city from Iran, another coronavirus hotspot.

More than 40 countries and regions outside mainland China have reported infections. On Wednesday, cases were detected for the first time in Brazil, Pakistan, Norway, Greece, Romania and Algeria. The coronavirus has infected more than 80,000 people and killed nearly 2,800, the majority in China.

A senior medical advisor in the Chinese government who won fame for combating the SARS epidemic in 2003 on Thursday said the original source of the coronavirus remains unclear.

"Though the virus was first discovered in China, it may not have originated from China," said Zhong Nanshan, an 83-year-old epidemiologist.

Zhong said he believes there are other wildlife species apart from the pangolin, which is suspected as the original source emerging from a seafood market in Wuhan that also sold wild animals, that carry coronavirus.

Zhong said China would present a video report to the European Respiratory Society to share China's experience in addressing the virus outbreak.

He again repeated an earlier forecast that the coronavirus outbreak in China will be contained by end-April after peaking in mid-to-late-February.