CJI to decide these crucial cases before retirement 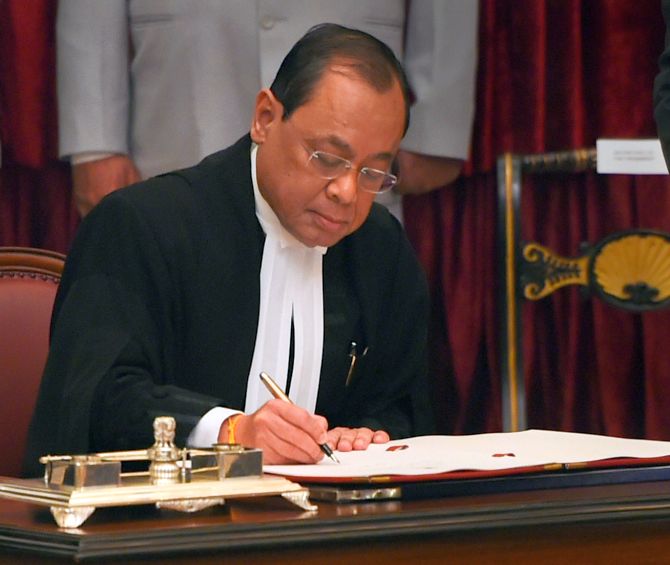 CJI to decide these crucial cases before retirement

New Delhi, October 30 (ANI): With just a few days remaining in the retirement of Chief Justice of India, Ranjan Gogoi, there are many important judgments to be delivered including political sensitive cases like Ayodhya land dispute and Rafale cases.

Chief Justice Ranjan Gogoi, set to retire on November 17, will deliver important judgments in less than two weeks after reopening of the top court on November 4 after Diwali break.

One of the most important cases which have political implications is the Ayodhya land dispute case.

After a marathon hearing of 40 days, a five-judge Constitution Bench presided by Chief Justice Ranjan Gogoi had reserved the verdict on October 16 in Ram Janmabhoomi-Babri Masjid case.

The case revolves around the ownership of 2.77 acres of disputed land in Ayodhya district in Uttar Pradesh, on which both Hindu parties and Muslim parties claim their right.

The Hindu parties, during the hearing, had argued that the entire 2.77 acres of land is the birthplace or 'janmasthan' of Lord Ram while the Muslim parties claimed title over the land saying Muslims had ownership of the land since 1528 when the mosque was built.

The arguments in the decades-old temple-mosque dispute were the second-longest proceedings in its history.

There are as many as 14 appeals in the apex court against the 2010 Allahabad high court judgment, delivered in four civil suits.

The Lucknow bench of the Allahabad high court in its September 30, 2010, verdict had ordered that the disputed site be divided into three parts -- one for deity (Ramlala Virajmaan), another for Nirmohi Akhara-a Hindu sect, and third to the original litigant in the case for the Muslims.

Another political sensitive case which awaits the verdict since May is on Rafale review petitions against its December 14, 2018 judgment upholding the 36 Rafale fighter jets deal.

The review petitions were filed by former Union Ministers Yashwant Sinha and Arun Shourie and advocate Prashant Bhushan contending that government had suppressed material information from the Court regarding the Rafale deal.

Along with review petitions, the Bench will also deliver its verdict on a contempt plea filed by Bharatiya Janata Party MP Meenakshi Lekhi against Congress President Rahul Gandhi for wrongly attributing to the court his 'chowkidar chor hai' slogan.

Gandhi later tendered an unconditional apology to the apex court for his 'unintentional, un-wilful and inadvertent' linking of the top court order on Rafale with his 'chowkidar chor hai' jibe against Prime Minister Narendra Modi.

A five-judge Constitution Bench of the Supreme Court had on April 4 reserved its order in a case whether the Chief Justice of India's office is covered under the purview of the transparency law, Right to Information Act (RTI).

The verdict in the case will decide whether the CJI's office will come under the ambit of RTI Act.

The issue arose from an appeal filed by the Supreme Court Secretary-General against the January 2010 judgement of the Delhi high court that declared the CJI's office a 'public authority' within the meaning of Section 2(h) of the RTI Act, 2005.

Advocate Prashant Bhushan, appearing for Subhash Chandra Aggarwal, who had sought details under RTI, argued that the court has favoured transparency, through various judgments, even before the RTI Act was brought in but when it comes to cases relating to transparency of the court itself, the 'court has not been very forthcoming'.

Another important judgment to be delivered by a Bench headed by Chief Justice Ranjan Gogoi before his retirement is on review petitions against the verdict allowing entry of women of all age groups into the Sabarimala Ayyappa temple.

On February 6, five-judge Constitution also comprising Justice R F Nariman, Justice A M Khanwilkar, Justice D Y Chandrachud and Justice Indu Malhotra, had reserved its judgement on a batch of petitions seeking review of its September 2018 verdict allowing the entry of women into the Sabarimala temple.

A Bench of Chief Justice Ranjan Gogoi will pass verdict on a batch of pleas challenging the constitutional validity of Finance Act, 2017 on the ground that it was passed by the Parliament as a Money Bill.

The pleas also challenged the Finance Act 2017 alleging that the government was taking over the powers to decide the terms and conditions of tribunal members, including their tenure.

The Centre had justified certification of Finance Bill, 2017 as a Money Bill saying it has provisions which deals with salaries and allowance to be paid to members of tribunals from the consolidated funds of India.