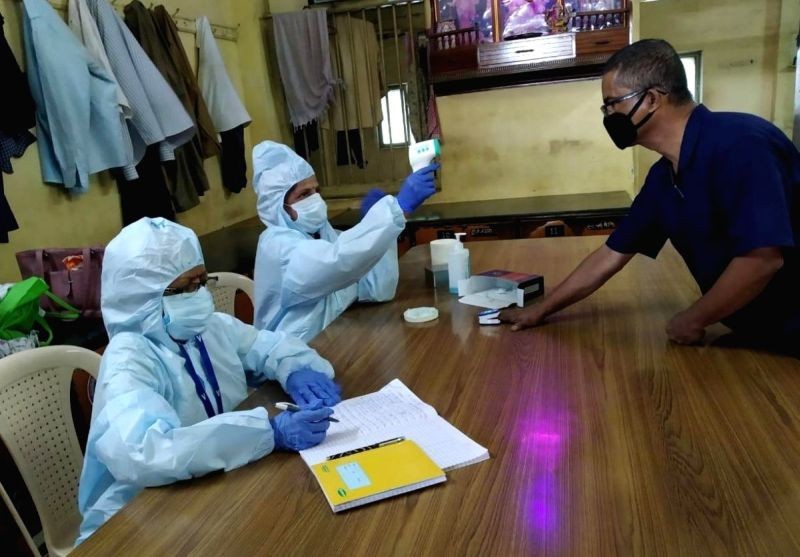 RAIGAD, July 22 (IANS): Hundreds of angry Bodni villagers, including at least 2 Covid-19 patients, trooped out on the road to defy the government, police and medical teams coaxing them to undergo Covid-19 tests, officials said on Wednesday.

The ire of the villagers was such that one of them allegedly attempted to spit on a PPE-clad medico, ostensibly to prove that nothing was wrong with them and they didn't require Covid tests.

The ruckus was witnessed in the small coastal fishing hamlet of Bodni in the Alibag sub-district of Raigad district, where around 60 families, among whom at least 72 persons have tested positive so far, created a huge health scare among the district medical, police and administration teams.

"This was unexpected. The villagers seemed to be under some misunderstanding and we sent our Tehsildar and other officials to convince them. But they remained adamant," a top official in the Alibag Collectorate told IANS, requesting anonymity.

The official added that the particular fishing hamlet in Bodni has already been declared as a containment zone, but the people there have been noticed flouting all norms routinely.

"From tomorrow, we plan to clamp stringent containment measures as per the laws. Nobody will be allowed inside or outside the area and other rigorous protocols shall be implemented, besides testing all the residents," the official cautioned.

The incident came almost simultaneously with a huge commuters' protest and train blockade which was witnessed in Nala Sopara town in Palghar district where irate commuters demanded resumption of public transport services.

At Bodni, two ambulances carrying a medical team arrived to carry out swab tests on the locals in the morning, but were stunned to find themselves blocked at the hamlet entrance by a menacing crowd, mostly women, booing and screaming at them to go back.

Some of the doctors and paramedics in PPE kits gently attempted to persuade them for the tests, but the villagers refused outright.

A local claimed that among the protesters, there were at least two Covid-19 patients who removed their face masks and mingled in the crowd, shocking the medicos and even the police, which had rushed to the spot.

"There is nothing wrong with us. They conduct tests and declare us as positive. We have no faith in these false tests," shouted some of the protesters even as one attempted to spit on the medicos.

Though the medical team departed and the crowd dispersed later, a police posse was maintained outside the hamlet as a precaution.

Speaking to the media, a medico said that recently, 72 persons had tested positive in the hamlet, of which many were sent to institutional quarantine while others went into home quarantine.

"Despite our best efforts, the villagers throw caution to the wind and do not observe the quarantine norms. The local community leaders must impress upon them since it can pose a huge health hazard for the entire region," said the doctor.

Prominent lawyer from Alibag, Surendra Dhavale, said that the district has been hit by a viral infection since the past few days of heavy rains and it was imperative for the people to take utmost precaution.

Meanwhile, on Wednesday evening, the village panchayat was huddled into a meeting to decide the next course of action, even as many villagers opined that Covid-19 norms must be adhered to in the larger social interest, said a villager.

With 12,156 Covid-19 cases and 236 deaths, Raigad district -- a part of the Mumbai Metropolitan Region (MMR) -- ranks among the top 10 worst-hit districts in Maharashtra.