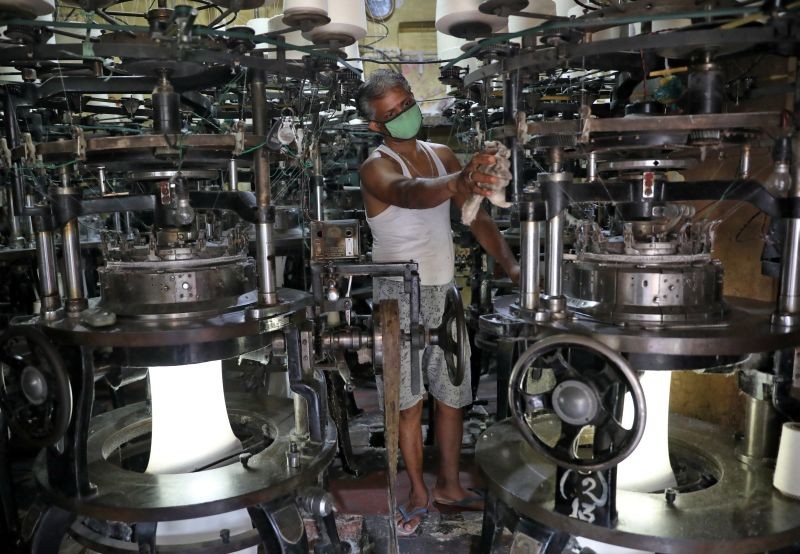 A worker wearing a protective face mask cleans a machine inside an undergarment factory after it was re-opened after a weeks-long shutdown to slow the spread of coronavirus disease (COVID-19), in Kolkata on April 20, 2020. (REUTERS File Photo)
India
22nd July 2020

CHENNAI, July 22 (Thomson Reuters Foundation): When Bajirao Thengde voiced his fears about going to work after dozens of colleagues fell sick with coronavirus, his boss at a motorbike factory in western India said he should "learn to live with the virus".

As India's coronavirus cases exceeded one million last week, unions say similar spikes in infections in reopened factories are putting workers at risk - accusing companies of skimping on health and safety as they rush to get business back on track.

It was only after several workers died and district authorities ordered a seven-day lockdown that Thengde's plant in Maharashtra state finally closed on July 10, weeks after calls for it to shut when the first cases appeared.

"We were demanding that the factory be temporarily closed but work carried on," said Thengde, a union leader who has worked for more than 30 years for Bajaj Auto Ltd - India's biggest motorbike exporter.

"The cases kept increasing despite us wearing masks, maintaining distance using foot pedals to access water taps and eating lunch by ourselves. And then there were the deaths."

Of the plant's roughly 8,000 staff, 250 have tested positive for the virus, but with their pay dependent on showing up for shifts, Thengde said workers had little choice but to go to the factory.

Bajaj Auto could not be reached to comment, but Managing Director Rajiv Bajaj said in a recent TV interview that the "factory was the safest place to be", saying employees were catching the virus in the community and bringing it to work.

India has issued health and safety guidelines for manufacturing facilities as part of a gradual exit from a weeks-long lockdown that has left millions jobless and short of food.

According to most estimates, the Indian economy will register a record contraction of over 4.5% in the current fiscal year that started on April 1 due to the pandemic.

State officials have also stepped up contact-tracing programmes around industrial hubs where cases have been reported, setting up special teams to work with factories on compliance and training workers on the new mandatory safeguards.

"We are very concerned about workers falling ill," said Pankaj Kumar, president of the Indian Industries Association, which represents small and medium-sized businesses.

Labour advocates, however, say the measures put in place do not go far enough, calling for more routine inspections, guaranteed living wages, as well as housing and transportation for workers during the pandemic.

"Workers are still not central to the unlocking of industries," said Hemalata, who goes by one name and is the president of the Centre of Indian Trade Unions (CITU).

"While some industries may follow protocols, who will ensure that smaller and medium-sized factories have safety measures in place? What is the point of opening up if workers returning to work are falling ill?"

Sharanjit Singh was among tens of thousands of migrant workers who wanted to return home when India imposed its first lockdown in March to contain the pandemic.

Singh, who comes from Punjab state in northern India, was talked out of walking home by his family and has since returned to his job at a reopened steel plant in Ballari in southern Karnataka state.

"Then I heard of workers falling sick and was worried," he told the Thomson Reuters Foundation by phone.

"I really wanted to go back (home) then, but the company had not cleared my dues. I cannot leave without my final payment and now because of worker shortage, that is unlikely soon."

More than 100 workers at the Jindal steel plant where Singh works have tested positive for coronavirus since June, with at least 10,000 quarantined after contact tracing, according to local media reports.

Frederick Castro, a spokesman for JSW Group, said prompt action had been taken to control the spread of infection among employees once their patient zero - a worker whose mother had tested positive - was identified.

"We're taking care of every employee who is testing positive and have also extended outreach to the community," he said.

But workers remain anxious as many states reimpose lockdown measures to stem the upswing in cases.

"I don't want to fall sick," Singh said, expressing a fear shared by many workers who are also desperate to start earning again.

"It's like a cat and mouse game for workers," said Gopinath Parakuni of charity Cividep, which campaigns on workers' rights.

"Workers need the wages but we have great concerns about what is happening on shop floors in factories. There is not much optimism that the industry will look at the workers well-being. They have not demonstrated that through the pandemic."

Authorities, meanwhile, say regulatory requirements to protect workers must be balanced with the need to allow industry to recover lost ground following the strict nationwide lockdown.

"A fine balance has to be maintained because economic activities cannot be stopped," said Maheshwar Rao, principal secretary of the Karnataka state labour department.

"Safety guidelines have been issued and we are asking industry associations to ensure they are followed. We don't want to have a heavy hand on regulation."

While Thengde and Singh are back in their jobs, both are keeping track of their sick co-workers' condition.

"I worry for them as much as I worry for myself," Thengde said. "At the end of the day, we all face the same risks and so do our families."