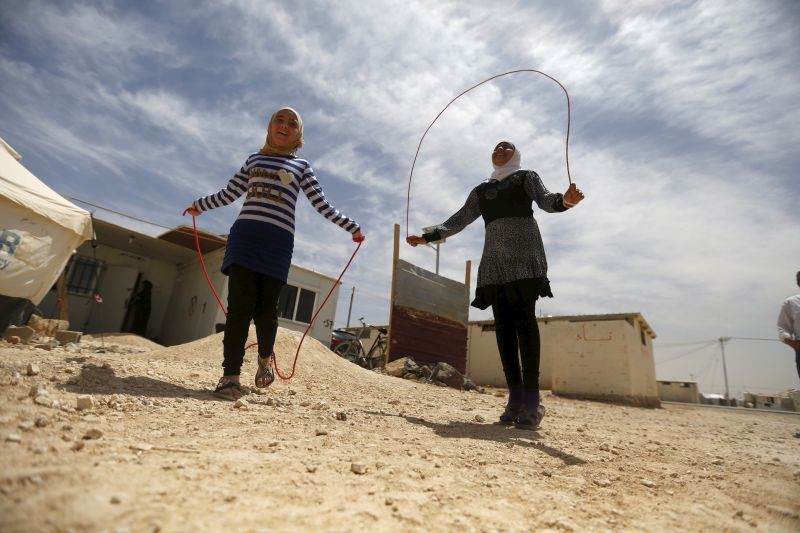 Syrian refugee Omayma al Hushan (R), 14, who launched an initiative against child marriage among Syrian refugees, plays with her friend outside their residence in Al Zaatari refugee camp in the Jordanian city of Mafraq, near the border with Syria on April 21, 2016. (REUTERS File Photo)
World
30th June 2020

"The pandemic both makes our job harder and more urgent as so many more girls are now at risk," said Natalia Kanem, head of the United Nations' sexual and reproductive health agency, UNFPA.

An additional 13 million girls could be married off and two million more could undergo FGM in the next decade, beyond what would have been expected, as COVID-19 disrupts global efforts to end both practices, UNFPA said.

Deepening poverty caused by the crisis may also push more parents to get daughters married early.

Kanem spoke as UNFPA launched a major report on the "silent and endemic crisis" of harmful practices, ranging from breast ironing to virginity testing.

"When so many girls and women are unwanted, cut, erased, given, traded and sold, our common future is undermined. We should all be outraged," she told a news conference.

There are at least 19 harmful practices including violent sexual initiation rites, witchcraft accusations, branding, dowry-related violence, force-feeding and body modifications such as neck-elongation.

Kanem said three remained "stubbornly widespread" despite almost universal condemnation: child marriage, FGM and the preference for sons over daughters, which leads to high numbers of female foetuses being aborted.

More than 140 million females are "missing" in the world today, mostly in China and India, due to pre-natal sex selection or parents neglecting baby girls so badly that they die, UNFPA said.

Some 33,000 girls are forced into early marriage every day usually to much older men, the report added, and an estimated 4.1 million are at risk of FGM this year.

Harmful practices are rooted in gender inequality and a desire to control women's bodies and lives, Kanem said.

They often cause lasting harm to girls' health, education and future opportunities, but their impact on wider society and future generations may be even greater, she added.

Major gender imbalances caused by a preference for sons can leave men unable to find partners, which exacerbates the risks of rape, sexual exploitation, trafficking and child marriage.

Kanem said laws banning harmful practices were only a starting point, and that grassroots, bottom-up initiatives were crucial for changing attitudes.

Education is a particularly powerful tool for boosting equality, she said, adding that men should also use their privilege to raise the value of girls in society.

Although rates of FGM and child marriage are falling, Kanem said population growth means the actual numbers of girls being cut or married is increasing.

Child brides are now sold on social media while reproductive health technology can help parents ensure they have a son.

In countries such as Egypt and Sudan, parents increasingly have their daughters cut by health professionals, undermining efforts to end FGM, the report said.

"We cannot let anything, not even the COVID pandemic, get in our way," Kanem said.