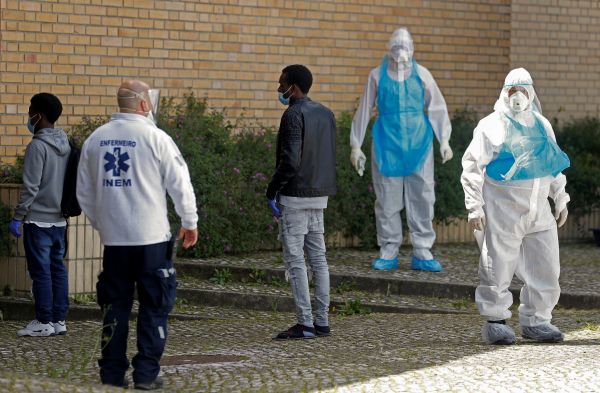 Medical staff stand next to asylum seekers evacuated from a hostel as they arrive at the Central Mosque to be tested for the coronavirus disease (COVID-19), in Lisbon, Portugal on April 19, 2020. (REUTERS Photo)

LISBON, April 20 (Reuters): The coronavirus has swept through a hostel in the Portuguese capital Lisbon, infecting 138 of the 175 asylum seekers housed there, a municipal official said on Monday.

Residents were evacuated from the hostel on Sunday and taken to Lisbon's Central Mosque for testing after one of them tested positive for the virus, city councillor Carlos Castro told Reuters.

The few who did not test positive will be taken back to the hostel, which has now been decontaminated.

Monica Farinha, the head of the Portuguese Council of Refugees (CPR), said the case had been handled smoothly but her organisation was concerned about the possibility of contagion in other hostels where social distancing is difficult.

The CPR, which is responsible for temporary accommodation for asylum seekers while their applications are processed, currently houses 950 people -- 150 in its own centres and 800 in hostels, Farinha said.

She could not immediately say from which countries the asylum seekers who were evacuated from the hostel on Sunday had come.

All foreigners in Portugal with pending applications at border control were granted the rights of permanent residents on a temporary basis at the end of March, including access to the national health service, welfare benefits, bank accounts, and work and rental contracts.

Migrants were moved out of Lisbon's airport detention centre on April 7, border control service SEF told Reuters, but the agency did not say where they were relocated to and how many people were in the centre at the time.

A state of emergency in place since March 18 was renewed on Thursday until May 2. But Prime Minister Antonio Costa has said that if the spread of the coronavirus continues to slow, some businesses such as local shops and hairdressers could re-open in May.