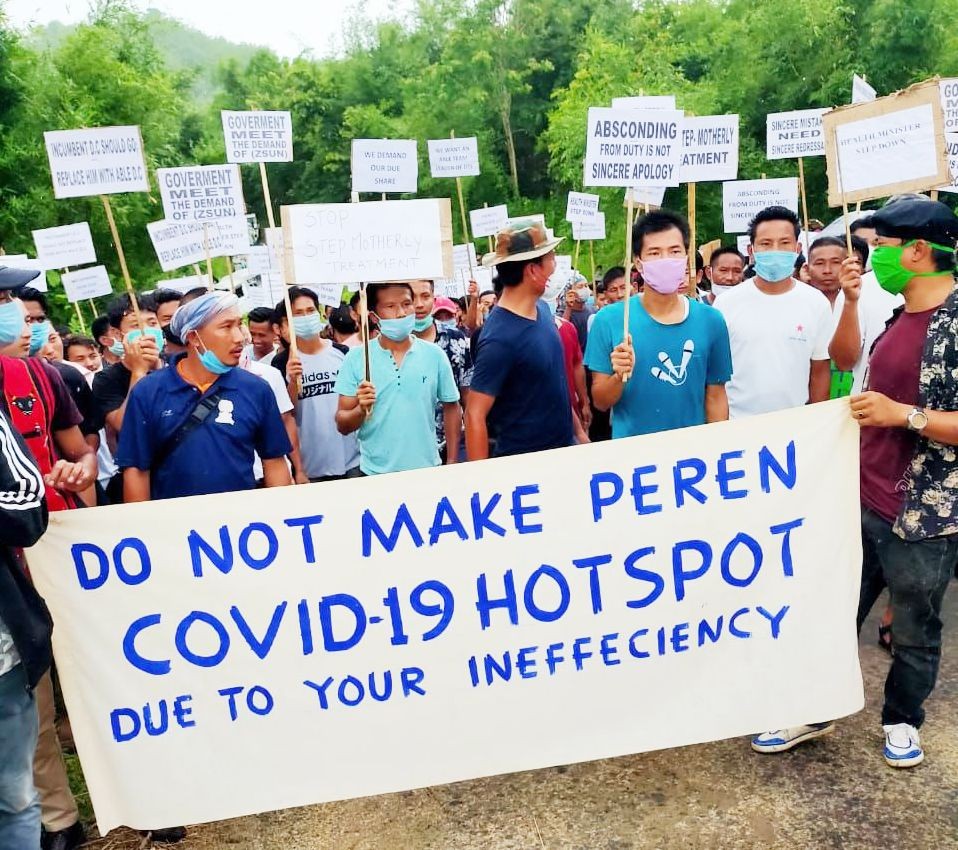 A section of the protestors during the rally organised in Peren district on July 7.

Student bodies in Peren district on July 7 organised a rally in Peren town, an apparent outburst following government’s inaction and ‘lackadaisical’ attitude in handling the COVID-19 situation in the district.

The protesters were seen holding banners and placards, some of which read “Go back DC, Peren needs a leader in this crisis,” “Incumbent DC should go, replace him with able DC,”etc. They also demanded for the State Health Minister to step down.

A memorandum was submitted to the Chief Minister through the ADC, Peren on July 7. “We have given 48 hours to fulfill our demands,” a ZSUN official told The Morung Express.

In the memorandum, the ZSUN, KSON and ZYON highlighted the ‘irresponsible’ action of two doctors leading to the release of 96 Haryana returnees from the facility quarantine “without any compulsory retest as mandated by protocol of contact tracing,” on the night of June 23.

“This has put Peren District at a precarious position and risk of community transmission of COVID19,” the Unions stated in the memorandum.

They expressed surprise at how the erring officials, instead of being reprimanded, had been transferred and posted at the State Capital. Terming it as an insult to the people, the ZSUN demanded for immediate exemplary actions to be initiated against the said doctors.

Moreover, the ZSUN also demanded for a full-fledged CMO to be posted at the earliest in the district “to fill the void of leadership in the Medical Department in the District.” According to the Union, the post of Chief Medical Officer has been lying vacant and despite request for a full-fledged CMO to be posted. The former CMO, who has now been promoted to Additional Director, has been entrusted to take charge as the CMO.

The Unions also demanded that the incumbent Deputy Commissioner be reassigned and appoint “someone who is competent and can shoulder the responsibilities of this magnitude at this hour.”

Due to inefficiency of the Administrative head, the district has not been able to effectively handle this pandemic overall, the ZSUN, KSON and ZYON stated.

Government to respond in ‘media briefing’
It may be mentioned that the ZSUN had earlier served a seven-day ultimatum to the state government on June 10 slamming the “irresponsible attitude” of the state government in handing over returnees of Peren district on June 3 by violating the Standard Operating Procedure.

“We shall call for the third phase of agitation as the state government failed to respond our charter of demand. In the event of any untoward incident arising out of the protest, the government shall be held fully responsible,” ZSUN had stated on June 29.

However, so far, the government is yet to issue a public response to the ZSUN or JAC.

On being contacted by The Morung Express, Principal Director, Health and Family Welfare (H&FW), Dr Vizolie Z Suokhrie said that the officials in question have been transferred. He also informed that officials were sent to Peren to meet the Joint Action Committee (JAC) on COVID-19 on July 7 and he is yet to get a report from them.

While maintaining that comments cannot be made over the phone, the Principal Director informed that all the queries will be addressed in the media briefing ‘very soon’.

Meanwhile, State Health Minister S Pangnyu Phom tweeted later in the evening that “The Govt & Dept. is very concerned on the spiking of COVID-19 +ve cases in Peren. As an effort to contain the situation, the Dept have posted 3 permanent Doctors and deputed 5 Sr. Doctors along with 6 Lab. Technicians & 6 DEOs to provide technical support to Team Peren.”