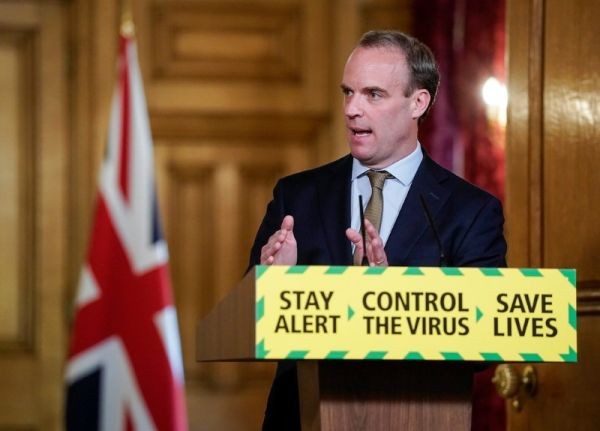 Britain's Secretary of State for Foreign Affairs Dominic Raab speaks at the daily digital news conference on the coronavirus disease (COVID-19) outbreak, at 10 Downing Street in London, Britain on May 18, 2020. (REUTERS File Photo)
World
31st May 2020

LONDON, May 31 (Reuters): British foreign minister Dominic Raab defended on Sunday the government's "careful" loosening of the coronavirus lockdown, saying it was the "right step to be taking at this moment in time".

Prime Minister Boris Johnson has come under fire from some scientists for easing a lockdown put in place 10 weeks ago, with some saying it was a premature and risky move in the absence of a fully functioning system to track new outbreaks.

With Britain experiencing one of the world's highest death rates from COVID-19, the government says it is easing the stringent lockdown "cautiously" to balance the need to restart the economy, but also to try to prevent another increase in the number of infections. But some say Britain is not prepared.

"We are confident that this is the right step to be taking at this moment in time," Raab told Sky News. "We are taking those steps very carefully, based on the science but also based on our ability now to monitor the virus."

From Monday, up to six people will be able to meet outside in England, some school classes will restart, elite competitive sport can resume without fans and more than 2 million people who have been "shielding" will be allowed to spend time outdoors.

Johnson is under pressure from some in his governing Conservative Party and businesses to start re-opening the economy, after spending billions to help protect companies and workers from the impact of the coronavirus crisis.

At the heart of the strategy to ease the lockdown is a system to test and trace those people who have come into contact with confirmed cases of COVID-19.

The government says the programme is already working, but some scientists say it is too early to say whether it is fit for purpose.

Peter Openshaw, a member of the New and Emerging Respiratory Virus Threats Advisory Group who sits on the government's scientific advisory group, said he shared other scientists' "deep concern."

"I think unlocking too fast carries a great risk that all the good work that has been put in by everyone to try to reduce transmission may be lost. So we do need to proceed with great, great care at this point."

Scotland's first minister Nicola Sturgeon, who has offered the nation slightly different guidance to that in England, agreed with scientists that the easing must be "very cautious".

"I agree with the opinion that has been expressed over the weekend that we've got to be very cautious," Sturgeon told Sky News. "This virus hasn't gone away, there is still a significant risk that it could run out of control again."