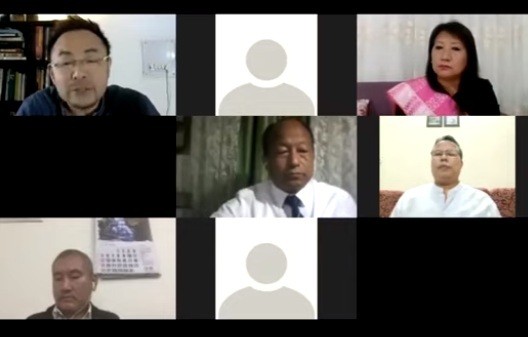 Some of the participants during the Naga Scholars Association (NSA) 3rd Webinar panel discussion held on the topic ‘Delimitation in Manipur and Nagaland’ on July 11.
Nagaland
13th July 2020

NSA webinar on delimitation in Nagaland and Manipur held

The discussion started with an opening note from Dr Zuchamo Yanthan, President of the Naga Scholars Association.

A press statement from the NSA shared findings and observations from the panel discussion.

While maintaining that delimitation exercise is a constitutional exercise, and does not violate the special provision of the Article 371A, the panel discussion also observed that Naga solution and Delimitation are two very different issues, hence, both issue cannot be linked together.

According to it, the main purpose of delimitation is not to deprive any district or tribe; rather, it is an exercise to bring proportionate representation of the people for equitable development.

They recognized the discrimination against some sections in the distribution of seats not only in Nagaland but also in Manipur.

Exercising delimitation is not only necessary but also important for rectifying past mistakes for bringing social justice, they observed, adding that there is an urgent call for justice, peace and understanding among the Nagas to uplift one another and not to look at each other as rivals.

It also stated that the use of 2001 census in Nagaland Municipal Act 2001 is an indication of its recognition and validity by Government of Nagaland.

In her opening remark, Professor Rosemary stated that the problem in Nagaland erupted right after the RP Desai Delimitation Commission announced the redacted electoral process on deferment of the earlier Delimitation Act in Nagaland (and Manipur).

She also stated that the public space is consumed with the dilemma of precedence between the Naga political solution and delimitation.

However, drawing a line between the two, she said delimitation prioritizes justice and development. It is a matter of legal rights of inclusivity that entails equitable development. In contrast, the peace process is outside the purview of such sanctions.

She further highlighted the ‘gross violation’ of rights in the constituency representation in Nagaland which is 1973 census-based, adding that neither does the present 2002 delimitation act present an acceptable rationale as the 2001 census is flawed according to facts.

Citing Manipur's refrain in exercising delimitation in 2005 because of the flawed 2001 census, she expressed the 2011 census as a better option.

The second speaker, Worso Zimik dwelled on the legal structure and its functionality in our society. He highlighted the asymmetry between the territorial settlements and the demographic spread in Manipur. The 90% of state’s land occupying the hilly terrain is inhabited by almost 40% STs to the total population, and the valley by the dominant Meteis constituting almost 60% of the population. Highlighting the ‘politics of representation’, out of 60 legislative seats, 40 are reserved for the valley people, and 19 are reserved for the STs and one an unreserved seat. “This gross political deprivation is the economic downside of the country's legal structure,” he asserted.

Worso further stated that statistically speaking, there has been exponential population growth in the hills, so, making 2001 as the base year would be tantamount to curtailing the fundamental rights of the hill people.

At the same time, waiting till 2031 will add another 10 years of injustice without delimitation. He stressed that “since the law has a space of redefinition and readjustment, we should appeal to the concerned authority to bring an acceptable solution for our rights.”

Elu Ndang emphasized on the distinction of delimitation and the Naga peace process and his practical proposal for a solution at a personal level. While delimitation deals with proportionate representation and equitable development, the Naga peace process is distinguished by its demand for sovereignty and the amalgamation of the Naga tribes. The former works within the mandate of the Indian constitution, whereas the latter is ultra vires, he opined.

His concerted appeal to the Naga people was to act in tandem with the demand of the time in the same manner the institution of delimitation was that of need-based. He reasoned on the need to avoid the ‘nitty-gritty’ of past inactions but make the most of the present looking at the posterity's need.

Jonas Yanthan argued that there is an attitude problem by some sections on the issue of delimitation, and that these groups of people see the delimitation exercise only as “transfer of seats from one district to another, or from one tribe to another, loss and gain of seat etc.” However the main purpose of delimitation is not to deprive any district or tribe, rather, it is an exercise to bring proportionate representation of the people for equitable development. Therefore, to oppose delimitation would mean to perpetuate the prevailing disparity among the people in the state, he observed.  He further stated that linking the issue of delimitation and Naga peace talk is demeaning to the “very sacred issue of the Naga cause.” Very often the Naga political issue is used against women rights, delimitation etc, only to serve vested interest, which is dangerous, he further added.

The panel discussion was followed by questions and observations from participants. The session concluded with vote of thanks.