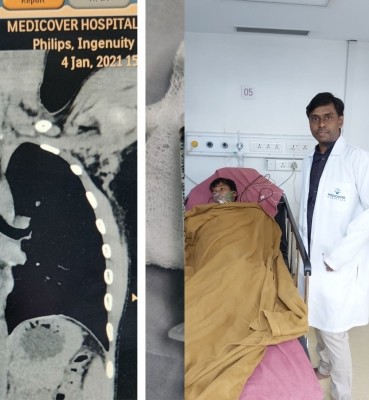 Hyderabad, January 5 (IANS): Doctors at a Hyderabad hospital removed a bulb from a nine-year-old boy's lungs after he had accidentally swallowed it.

Prakash of Mahabubnagar in Telangana had accidentally swallowed the toy bulb while playing on Monday. He was rushed to Medicover Hospitals with symptoms of profuse cough and difficulty in breathing.

According to doctors, the CT scan of his chest revealed a foreign body in the right main bronchus extending on to the lower bronchus. If left unattended, it could have led to serious life-threatening complications as the toy bulb (foreign body) was obstructing the airway if it migrates proximally.

A decision was taken to perform Pediatric Rigid Bronchoscopy and the same was done under general anesthesia by Raghu Kanth, a senior consultant Interventional Pulmonologist along with the anesthetist team lead by Vijay.

The boy was absolutely fine post-operatively, and was discharged the same day without any complications.

"Ingestion of foreign bodies is a relatively common problem encountered in paediatric age group. Children tend to explore the environment by inserting objects into their mouths; Most of these items can be inevitably swallowed," said Raghu Kanth, doctor.

"Ingestion of foreign bodies is also a significant cause of parental anxiety. Foreign body inhalation is a potentially serious problem that peaks in children.

"The phenomenon of foreign bodies' inhalation is a worldwide problem. Many patients who have inhaled foreign bodies are symptomatic and sometimes life risk if it is in major airways," he added.