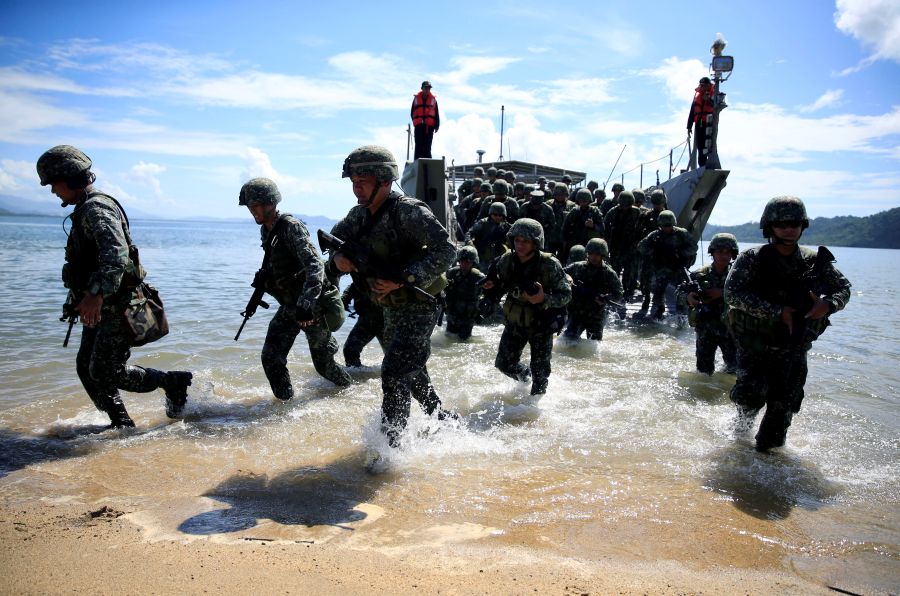 Filipino soldiers disembark from the landing ship before they dock at Motiong Beach, as part of the Humanitarian Assistance and Disaster Response scenario during the Philippines and United States annual Balikatan (Shoulder-to-Shoulder) exercises in Casiguran, Philippines on May 15, 2017. (REUTERS File Photo)

MANILA, February 28 (Reuters): A U.S.-Philippines troop agreement recently scrapped by President Rodrigo Duterte could still be salvaged, a senior diplomat said on Friday, boosting hopes in both countries of retaining one of Asia's oldest military alliances.

Talks were taking place to find a solution, but the alliance would prevail, recognising the importance of the United States as a global power, said Jose Manuel Romualdez, Philippine ambassador to Washington.

"From what I'm told, the door is not totally shut," he told a forum.

Romualdez said both countries were looking at how they can "polish" and "improve" the Visiting Forces Agreement (VFA), with a Philippines troop pact with Australia and a similar agreement in the works with Japan possible templates.

The mercurial Duterte caused a stir earlier this month by serving notice of the VFA's termination, demonstrating his fury over the rescinding of a U.S. travel visa for his former police chief due to human rights concerns by some U.S. lawmakers.

The VFA, which would end in August, provides rules for the rotation of thousands of American troops in and out of the Philippines for war games and scores of annual exercises.

His opponents were outraged at what they saw as a show of petulance, and some lawmakers who typically side with Duterte urged him to reconsider a move that could weaken an under-resourced military stretched constantly by natural disasters and Maoist and Islamist rebellions.

Philippine efforts to protect the alliance underscore contrasting opinions within the Duterte administration and legislature about his foreign policy trajectory, especially over his openly hostile approach towards the United States, where relatives of millions of Filipinos live.

It would also reduce Washington's options in the Pacific region, with complications over a longstanding U.S. troop presence in Japan and South Korea, and only limited engagements for the U.S. military elsewhere in Southeast Asia.

The other source of foreign policy friction in the Philippines is Duterte's fondness for China, which many Filipinos view with scepticism due to a history of perceived maritime encroachments.

"The only ally we can hope to deter China is the U.S," he told the forum.