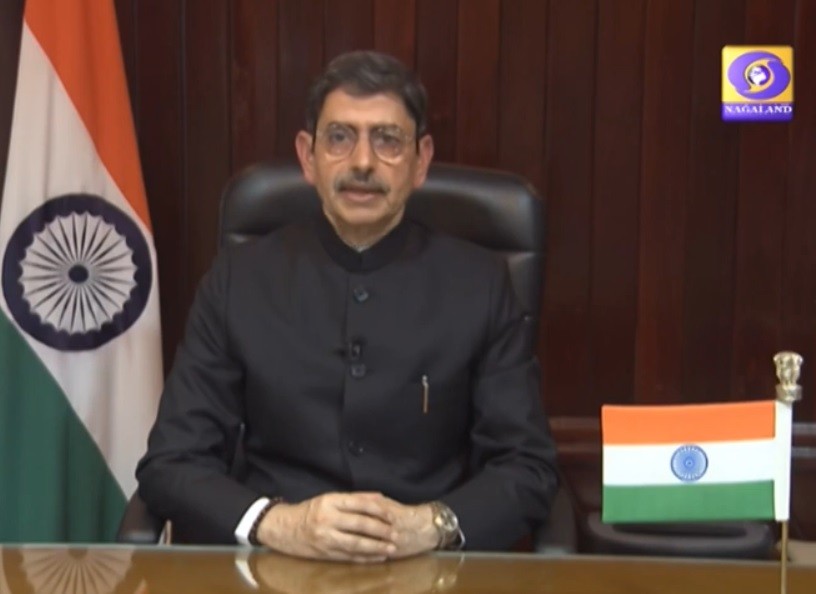 Waves of positive change and growth seem to have been bypassing Nagaland, observes RN Ravi in his 74th Independence Day Speech

Kohima, August 15 (MExN): The Governor of Nagaland, RN Ravi stated that a ‘deeply entrenched network of vested interests” has emerged during peace period and they “misappropriated the dividends of Peace and did not allow them to reach the people.”

“There is mass scale mayhem and miscarriage of dreams and expectations of the people of Nagaland. It is unendurable and unacceptable,” he asserted in his customary message to the people of the State on the occasion of India’s 74th Independence Day.

The Governor said that the waves of positive transformation and growth are sweeping all parts of the country, and even the North-East is emerging as “an economic hub and is bracing to play a pivotal role in India’s Act East Policy.

“The region is emerging as a destination of choice by the investors from the rest of the country and the world who until recently were wary of even looking towards North East,” he said, adding that the impressive changes for are “quite visible in the neighboring States of the region.”
However, Ravi regretted that the waves of positive change and growth “seem to have been bypassing our State, Nagaland.”

Concerning issues
Although, Nagaland is the 16th State of the Indian Union and the second oldest State in the North East and endowed with one of the finest of human and natural resources, he noted that in recent years, the State is falling behind after initially racing ahead of several other States in the region despite odds.

“Unfortunately today it has the dubious distinction of the worst performing State in the Country including the North-East region on almost all the significant indicators of Human Development,” he said.

Highlighting some of the concerning issues, the Governor said that while human resource is one of the “most precious asset, crucial to fulfill the Naga dreams and aspiration,” it is on steady decline, noting that “some 25% of our children are not enrolled in the Schools and 60% of our youth have not seen High School.”

“Literacy in Nagaland may be technically over 80%, in reality; those who have not even been to High School cannot be called functionally literate,” he argued, wondering “positive contribution they can make to their family, their village, their community and the State.”

In addition, he pointed out that despite the highest pupil-teacher ratio in the State as compared to the rest of the country, the drop-out and failure rates in Government Schools were alarming.

“Absence of internet connectivity and Information Communication Technology facility in majority of our schools is holding back our youth in the global race for progress,” he said.

As a result, it is making online teaching, specially in COVID-19 situation, impossible, pushing them further behind, he added.

The Governor also termed the investment climate in Nagaland as “worrisome,” and called for building investment friendly eco-system so as to encourage investors from outside and within the State to have sufficient confidence to set up enterprises.

“Unfortunately Government job is the main source of employment and economy is largely based on salaries of Government servants,” he said.

“Even our agriculture and horticulture sectors which are the mainstay of our State’s economy are in distress. We have to encourage and incentivise entrepreneurship,” he added.

The Governor, however, noted that the relative decline is more “obvious during the recent decades.”

“When the security forces and the Naga armed groups agreed to suspend operations against each other paving the way for political settlement, the legitimate expectation of the people of Nagaland was dividends of peace – freedom from fear of guns, better health, better education, better infrastructure, better livelihood opportunities, an atmosphere to dream and an eco-system to pursue their dreams,” he stated.

Ravi attributed the decline to a “deeply entrenched network of vested interests has emerged during the period which has misappropriated the dividends of Peace and did not allow them to reach the people” and termed “mass scale mayhem and miscarriage of dreams and expectations of the people” as unendurable and unacceptable.

In India’s grand march forward, Nagaland cannot be left behind, he said, adding: “The people of Nagaland have their natural right of a dignified future.”

To achieve this, he called for building and strengthening institutions of accountability, justice and fair play.

“We will have to break the vice – like grip of the vicious circle of the network of vested interests and make way for the virtuous circle of peace, prosperity and happiness for our people."

The Governor also maintained that the task cannot be achieved by Government alone.

“In this endeavor, we need the co-operation of the two million people of Nagaland. I have deep and abiding faith in the inherent goodness and capability of our people,” he added.