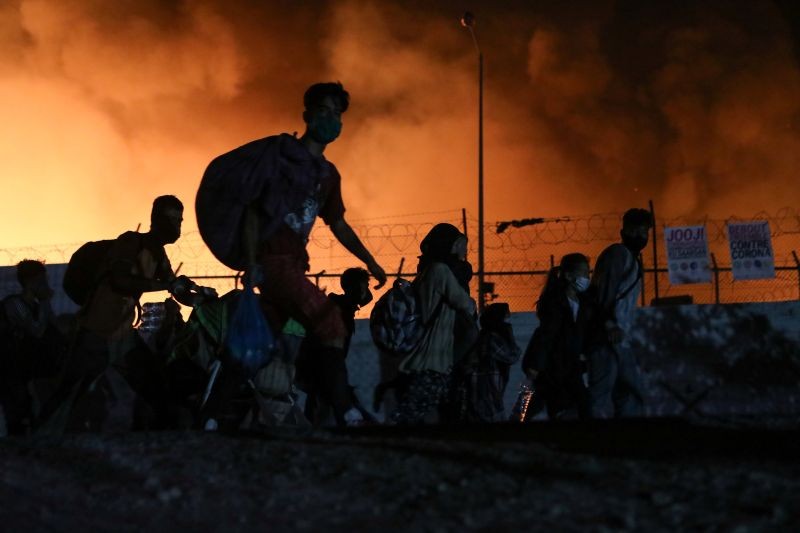 Refugees and migrants carry their belongings as they flee from a fire burning at the Moria camp, on the island of Lesbos, Greece on September 9, 2020. (REUTERS Photo)

LESBOS, Greece, September 9 (Reuters): Thousands of migrants fled fires early on Wednesday that tore through an overcrowded camp under coronavirus lockdown on the Greek island of Lesbos, but there were no reports of any casualties.

A migration ministry official said the Moria camp, which hosts over 12,000 people, was "probably totally destroyed" and that the government was struggling to find alternative shelter for the migrants who were gathered on streets outside the camp.

The cause of the fires is not yet known but authorities are investigating whether they were deliberately started. Athens put Lesbos under a state of emergency and sent police reinforcements to the island, which lies just off Turkey, to help keep order.

The fire broke out just after midnight and by dawn on Wednesday most of the camp was a smouldering mass of burnt containers and tents, with a few people searching through the debris for their possessions.

The whereabouts of 35 migrants who tested positive for COVID-19 this week were unknown, raising concerns that they might spread the virus on the island.

"There was not just one but many fires in the camp. Migrants threw stones at firefighters trying to put out the fires. The cause is under investigation," Constantine Theophilopoulos, fire brigade chief for the northern Aegean, told ERT TV.

The camp was placed under quarantine last week after an asylum-seeker tested positive. Authorities had confirmed 35 infections as of Monday evening.

Initial reports suggested the fires broke out at different locations in the sprawling camp after authorities tried to isolate some individuals who had tested positive for COVID-19.

"The camp has been evacuated. All these people are on the national road towards (the town of) Mytilini," said Panagiotis Deligiannis, a witness from Moria.

"There are police out who are not letting them through. These people are sleeping left and right in the fields."

Aid groups have long criticised conditions at the camp, which hosts more than four times its stated capacity. They say it is impossible to implement social distancing and basic hygiene measures there.

Lesbos was put under a state of emergency for four months for public health reasons, the civil protection service said, which allows it to mobilise all forces to support the island and asylum seekers.

Mytilini mayor Stratis Kytelis said migrants would have to be moved or housed on ships to prevent the spread of COVID-19.

"The situation was out of control," policeman Argyris Syvris told Open TV, adding that police had been forced to release some 200 people who were due to be repatriated to their countries.

Greek Prime Minister Kyriakos Mitsotakis held an emergency cabinet meeting on the situation, and the migration and interior ministers headed to Lesbos.

Government spokesman Stelios Petsas told state TV ERT those living in the Moria camp would not be allowed to leave the island due to the coronavirus outbreak.

EU Home Affairs Commissioner Ylva Johansson said the European Union had agreed to fund the immediate transfer of 400 unaccompanied children and teenagers to the Greek mainland.

German Foreign Minister Heiko Maas described the fires as "a humanitarian disaster", and said EU member states should be ready to take in some of the refugees from the camp.

Lesbos was on the front line of a mass movement of refugees and migrants to Europe in 2015-2016.