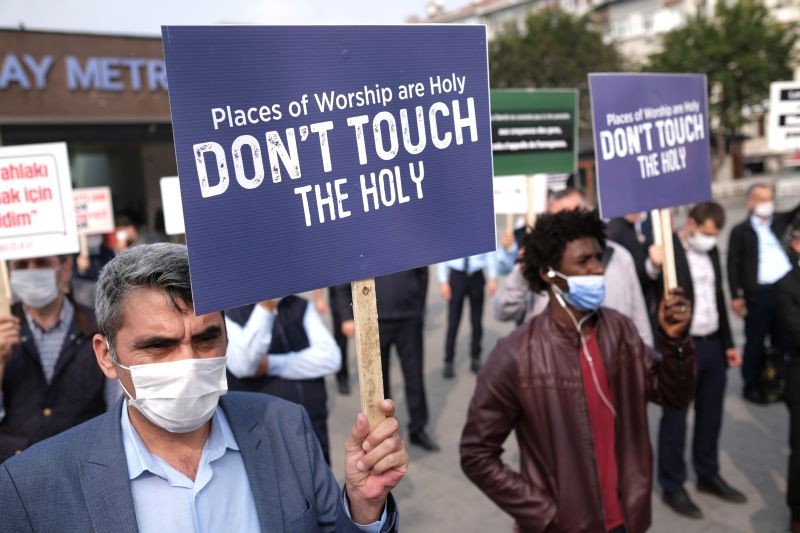 PARIS, October 27 (Reuters): France warned its citizens living or travelling in several Muslim-majority countries to take extra security precautions on Tuesday as anger surged over cartoons of the Prophet Mohammad.

In a sign that some countries want to limit the fallout, Saudi Arabia condemned the cartoons but held back from echoing calls by other Muslim states for a boycott of French products or other actions.

The row has its roots in a knife attack outside a French school on Oct. 16 in which a man of Chechen origin beheaded Samuel Paty, a teacher who had shown pupils cartoons of Prophet Mohammad in a civics lesson on freedom of speech. The caricatures are considered blasphemous by Muslims.

France's foreign ministry on Tuesday issued safety advice to French citizens in Indonesia, Bangladesh, Iraq and Mauritania, advising them to exercise caution. They should stay away from any protests over the cartoons and avoid any public gatherings.

"It is recommended to exercise the greatest vigilance, especially while travelling, and in places that are frequented by tourists or expatriate communities," it said.

The French embassy in Turkey issued similar advice to its citizens there.

Turkish President Tayyip Erdogan has been one of the most vociferous critics of the French government, leading calls for a boycott of French goods.

French Interior Minister Gerald Darmanin retorted on Tuesday that Turkey, and Pakistan, should not meddle in France's domestic affairs.

Paris has recalled its ambassador in Ankara, and Pakistan's parliament on Monday passed a resolution urging the government to recall its envoy from Paris.

The images of the Prophet were first published years ago by a French satirical magazine, whose editorial offices were attacked in 2015 by gunmen who killed 12 people.

Since the beheading of the teacher Paty this month, the cartoons have been displayed in France in solidarity, angering some Muslims.

President Emmanuel Macron, who met representatives of France's Muslim community on Monday, has pledged to fight "Islamist separatism", saying it was threatening to take over some Muslim communities in France.

Saudi Arabia appeared to be taking a moderate response to the controversy, steering clear of boycott calls. A Saudi foreign ministry official said on Tuesday the Gulf state condemns all acts of terrorism, an apparent reference to Paty's killing.

"Freedom of expression and culture should be a beacon of respect, tolerance and peace that rejects practices and acts which generate hatred, violence and extremism and are contrary to coexistence," the official said in a statement.

The daily Arab News on Tuesday cited the head of the Saudi-based Muslim World League, Mohammed al-Issa, as cautioning that an over-reaction "that is negative and goes beyond what is acceptable" would only benefit "haters".

However, calls for a boycott of French supermarket chain Carrefour were trending on social media in Saudi Arabia. In Kuwait, some supermarkets have pulled French products.

Turkey's Erdogan on Monday asked his compatriots to stop buying French goods and accused France of pursuing an anti-Islam agenda.

France is a major exporter of grain to mainly-Muslim NorthAfrica, and French companies in the autos and retail sectors also have significant exposure to majority-Muslim countries.

French Trade Minister Franck Riester said it was too earlyto put a figure on the impact of a boycott campaign but so farit was limited and mainly affected French agricultural exports.

A ministry official told the diplomat during their meeting on Monday that Iran strongly rejected "any insult and disrespect to the Prophet of Islam".

In Bangladesh on Monday, protesters held placards with the image of the French President and the words: "Macron is the enemy of peace".