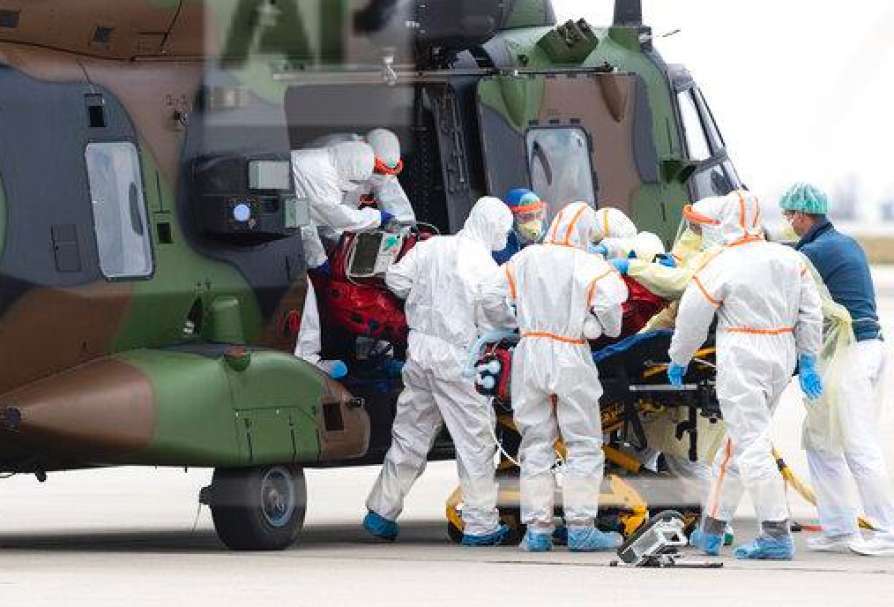 Paris, April 6 (IANS) With the total coronavirus fatalities swelling to 8,078 while the number of critically-ill patients increasing less rapidly, French authorities warned that the virus "continues to hit hard," urging people to continue to respect the confinement.

The number of patients who died in the country's hospitals rose by 357 to 5,889 on Sunday. The one-day increase was less than 441 registered on Saturday and the record of 588 on Friday, according to the Health Ministry, Xinhua news agency reported.

In addition, the counting by elderly nursing homes across the country found that there were 2,189 deaths since March 1, the ministry said in a press release.

A total of 70,478 people have been tested positive for coronavirus since the start of the epidemic. The number of "confirmed or possible" cases in nursing homes rose to 22,361.

Some 28,891 people are hospitalized, among them 6,978 need life support in intensive care units (ICU), up by 140, a smaller increase compared with 176 recorded a day before.

The ministry noted that the infection was spreading at slower pace and the number of critically-ill patients was increasing less rapidly, which it called a key indicator to evaluate how hospitals are using the available human and logistic resources.

A slowdown in the number of patients in intensive care units meant less pressure on hospitals and that drastic curb on people movement to halt the virus spread begins bearing fruit.

However, health and local authorities were cautiously optimistic, warning that social distancing instructions should be strictly respected despite some good signs and good weather.

"Let us all be mobilized to fight against COVID-19. Let us respect the instructions, strict confinement, physical distance and barrier gestures, to protect ourselves, protect our loved ones," the ministry said, warning that the coronavirus "continues to hit hard."

"Even if the weather is nice, don't forget that to limit the spread of COVID-19, containment measures are still in place," Paris police prefecture said on Sunday.

Warm spring weather had incited Parisians to walk out, defying a lockdown imposed in mid-March to stem the virus spread.

Footages broadcasting by local TV channels showed many people walking or jogging along the bank of the Seine river enjoying a sunny Sunday.

"We are in a period of confinement. Staying at home saves your own life and that of others," he told BFMTV news television.

France has imposed a two-week nationwide lockdown on March 17, and it was extended to April 15.

Under the confinement, only journeys to buy food and medicine and to go to work are allowed. All non-essential businesses have been closed and open-air markets are shut down. People would be allowed to go out for a walk with their children or to exercise once a day for no more than one hour, and within one kilometer of their home. Sanctions against those who break the rules would be tougher.

Patrick Pelloux, president of the Association of hospital emergency doctors, echoed the urgent necessity to stay confined and not to cede to temptation of good weather.

"We are probably winning the battle, but the French must understand that it we are winning over the epidemic it's because they remained confined," Pelloux told France info radio.

"Better days will come, we just need more little patience... It's difficult, but we absolutely have to stay confined," he said.

The scientific council, which advises the government on the epidemic crisis, recommended to prolong containment at least until April 28, noting that three weeks were needed to obtain an initial estimate of the impact.