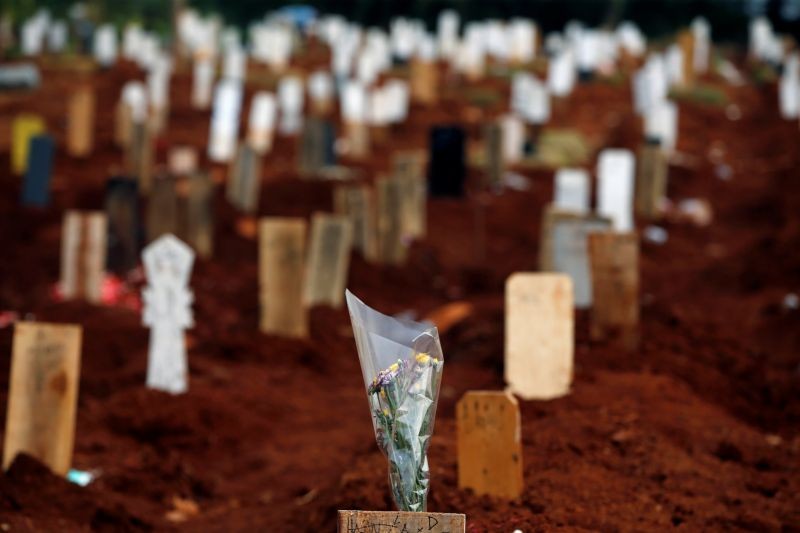 Flowers are placed on a grave at the Muslim burial area provided by the government for victims of the coronavirus disease (COVID-19) at Pondok Ranggon cemetery complex in Jakarta, Indonesia on August 5, 2020. (REUTERS Photo)
World
5th August 2020

The global death toll from the coronavirus surpassed 700,000 on Wednesday, according to a Reuters tally, with the United States, Brazil, India and Mexico leading the rise in fatalities.

Nearly 5,900 people are dying every 24 hours from COVID-19 on average, according to Reuters calculations based on data from the past two weeks.

That equates to 247 people per hour, or one person every 15 seconds.

President Donald Trump said the coronavirus outbreak is as under control as it can get in the United States, where more than 155,000 people have died amid a patchy response to the public health crisis that has failed to stem a rise in cases.

"They are dying, that's true," Trump said in an interview with the Axios news website. "It is what it is. But that doesn’t mean we aren’t doing everything we can. It’s under control as much as you can control it. This is a horrible plague."

In Brazil, President Jair Bolsonaro has minimized the gravity of the pandemic and opposed lockdown measures, even as he and several of his cabinet tested positive for the virus.

The pandemic was initially slower to reach Latin America, which is home to about 640 million people, than much of the world. But officials have since struggled to control its spread because of the region's poverty and densely packed cities.

More than 100 million people across Latin America and the Caribbean live in slums, according to the United Nations Human Settlements Programme. Many have jobs in the informal sector with little in the way of a social safety net and have continued to work throughout the pandemic.

Even in parts of the world that had appeared to have curbed the spread of the virus, countries have recently seen single-day records in new cases, signaling the battle is far from over.

Australia also reported a record number of new deaths on Wednesday, taking the country's total to 247.