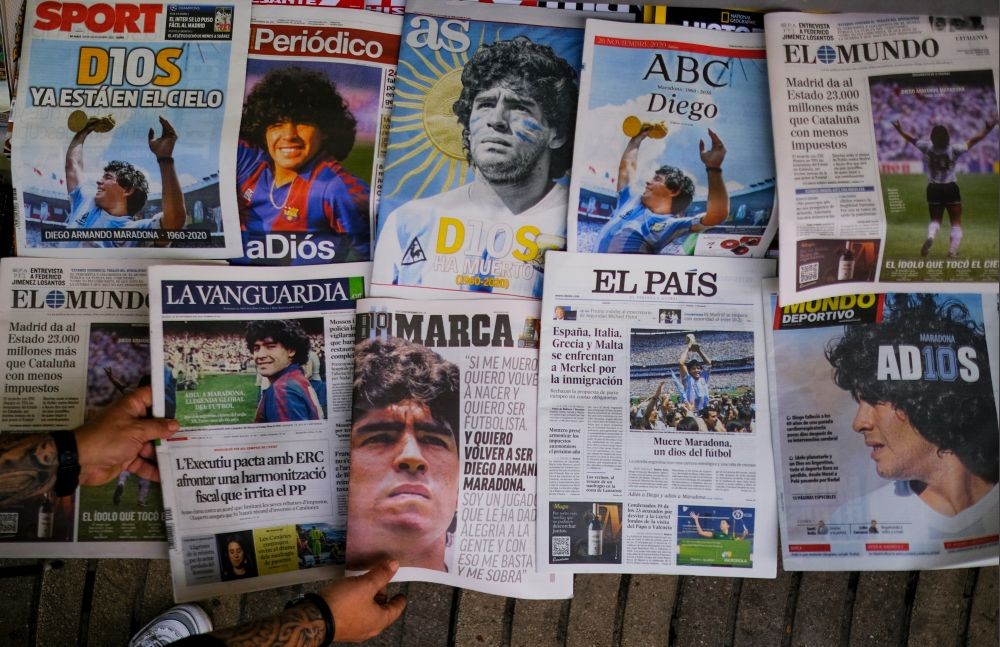 November 26 (Reuters) - Diego Maradona's death dominated the front and back pages of newspapers as the world bid farewell to the 'god of football', with his renowned "Hand of God" quote featuring prominently.

Maradona died after suffering a heart attack at his home in a suburb of Buenos Aires on Wednesday, less than a month after his 60th birthday.

"God is dead" read a headline in French newspaper L'Equipe alongside a picture of the former Argentina striker in the national team's famous blue-and-white striped kit.

British daily The Times splashed "In the hands of God" with the image of Maradona celebrating after beating West Germany in the final of the 1986 World Cup - a tournament he made his own as he spurred Argentina to their second title triumph.

Considered one of the greatest players of all time, Maradona finished the tournament with five goals, including arguably the two most famous goals of the 20th century in the 2-1 quarter-final win over England.

The first was a deliberate handball which he described as the "Hand of God" while the second - four minutes later - was the product of a solo run past half the England team to score what would later be known as the "Goal of the Century".

"There will be no equal" Argentine newspaper Clarin said with a picture of Maradona holding the World Cup aloft at the Azteca Stadium.

For many, Maradona will be remembered as more than just a player, especially in Argentina and Naples - where he led Napoli to their only two Italian league titles and the UEFA Cup, their only major European trophy.

"His gift as a broker of emotions, his artistry in the most noble and revered of games, was his route to becoming a household name like no other," Marcela Mora y Araujo wrote in The Guardian.

Spanish newspaper Mundo Deportivo kept things simple as they bid farewell with a single word - 'Ad10s', with his iconic shirt number 10 and name highlighted in the headline.