Health workers should be top priority for vaccines - nurses' group 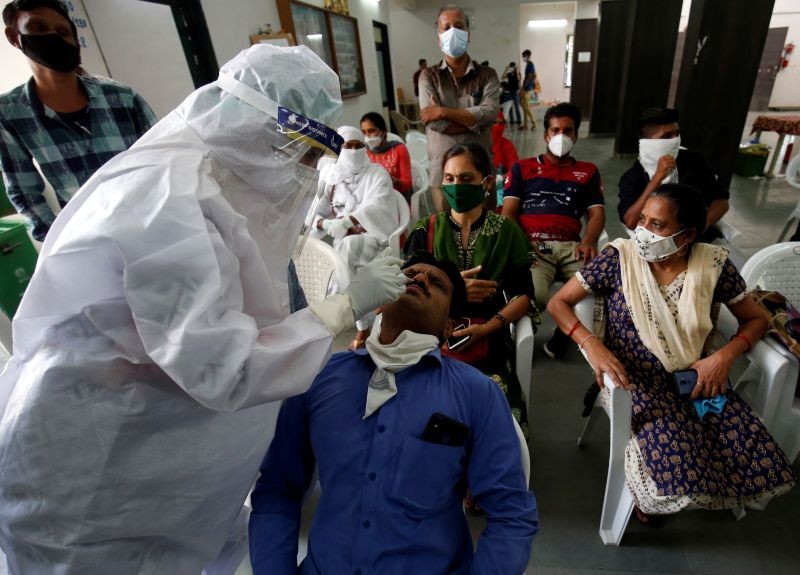 A healthcare worker wearing personal protective equipment (PPE) takes swab from a teacher of a municipal school for a rapid antigen test at a community center, amidst the coronavirus disease (COVID-19) outbreak, in Ahmedabad on July 27. (REUTERS Photo)
World
27th July 2020

GENEVA, JULY 27 (Reuters): Nurses and other health workers must be top priority for the first COVID-19 vaccines, especially as they are often left without enough protection against the virus in their frontline jobs, the International Council of Nurses said on Monday.

An estimated 1.5 million health care workers have been infected, three times the number in early June, it said, citing figures from the World Health Organization (WHO) on the novel coronavirus which has infected some 16 million people worldwide.

"We are continuing to receive reports of nurses and health care workers not having enough personal protective equipment, not being able to access testing, working under incredible strain and pressure," Howard Catton, chief executive officer of the Geneva-based ICN, told Reuters Television.

Researchers are making "good progress" in developing vaccines against COVID-19, with a handful in late-stage trials, but their first use cannot be expected until early 2021, the WHO's top emergency expert Mike Ryan said last week.

WHO's chief scientist Soumya Swaminathan said last week that it was drawing up a framework to ensure "fair and equitable access" would give priority to three groups including frontline workers such as medics and the police.

The ICN, which represents 130 national nursing associations, has appealed throughout the six-month pandemic for sufficient personal protective equipment for nurses.

Catton, referring to nightly public tributes in some countries, said: "Nurses, quite frankly, have had enough of the applause. They are saying, ‘we want action’, the applauses are ringing very hollow.

"Action, committing to vaccination for healthcare workers, ensuring personal protective equipment, testing nurses and healthcare workers: these are the issues which will really make a difference to nurses, but also to the people that they look after."