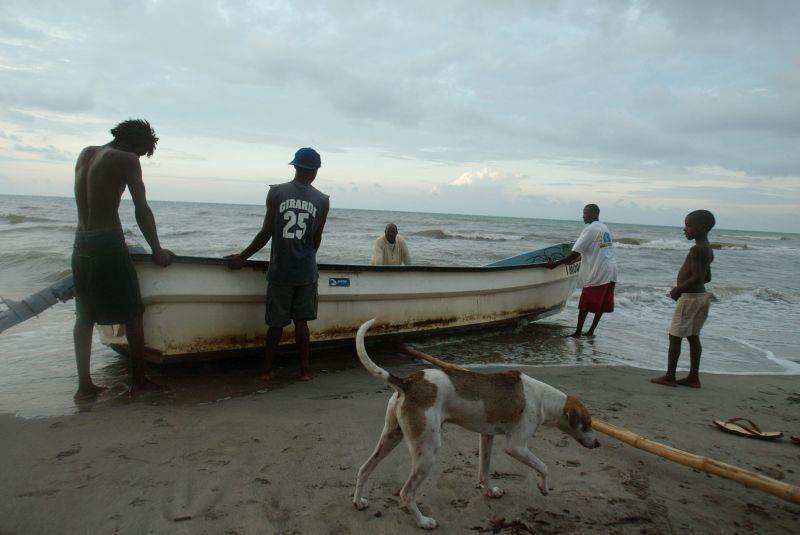 Garifuna men take their boat out of the sea after fishing near the community of Sambo Creek on the northern shore of Honduras on May 7, 2005. (REUTERS File Photo)
World
31st July 2020

BOGOTA, July 31 (Thomson Reuters Foundation): There has been no word of the five Black Honduran indigenous men who two weeks ago were abducted at gunpoint from their homes in a coastal fishing village and then bundled into cars.

The disappearance of the Garifuna leaders from the northern town of Triunfo de la Cruz is just the latest example of the dangers faced by indigenous activists in their decades-long struggle over their ancestral lands, rights advocates say.

"We know absolutely nothing about what's happened to them," said Miriam Miranda, a Garifuna leader and head of the Black Fraternal Organization of Honduras (OFRANEH). "We fear for their lives."

"This is a clear attack against the (OFRANEH) organization and the Garifuna people. It's an incident that shows the historic conflict in this region," she said in a phone interview.

At least 14 land rights defenders were killed in Honduras last year, up from 4 people in 2018 - making it the world's fifth deadliest country for activists out of 21 nations surveyed, according to advocacy group Global Witness.

The Garifuna are descended from African slaves and indigenous groups and have inhabited the Caribbean coast of Honduras since the late 18th century.

Honduran authorities were immediately informed of the men's disappearance on July 18 and an investigation has led to the arrest of one suspect, Danilo Morales of the human rights ministry (SEDH) told the Thomson Reuters Foundation.

"We are constantly monitoring how the investigation is going, and like everyone, we hope that the Garifunas can return to their homes safe and sound," said the head of the ministry's protection system for human rights defenders.

Community members who witnessed the incident told the ministry that they had seen the men being taken from their homes by people wearing uniforms, "allegedly from the police investigations branch (DPI)", Morales added.

Small protests have flared along motorways and in cities across Honduras since the abduction, with signs saying: 'Garifuna lives matter,' 'They were taken alive. We want them back alive.'

IN THE LINE OF FIRE

For years Miranda and other Garifuna leaders have been campaigning to preserve their ancestral lands which they say are under threat from big tourism development projects and palm oil companies.

They are frequently intimidated and targeted with attacks.

Miranda, an award-winning rights defender, has received death threats, been imprisoned and was once kidnapped with 17 other OFRANEH members by organized crime groups in 2014.

"Garifuna communities... have suffered persecution, criminalization and killings because of their opposition to public and private projects that affect their ancestral territories," said Erika Guevara-Rosas of Amnesty International.

Most attacks against human rights defenders in Honduras go unpunished, according to the advocacy group.

"The failure to identify, prosecute and punish those responsible sends the message that human rights defenders can be attacked without consequence," the Americas director said in emailed comments.

One of the latest victims was veteran Garifuna leader and land rights defender Antonio Bernardez, 71, who was found dead on June 21 after he had gone missing for six days.

A total of five Garifunas have been murdered since September 2019, according to the U.N. Human Rights Office in Honduras.

Caceres was shot by gunmen in her home after receiving death threats over her opposition to a hydroelectric dam project.

Last year, a Honduran court handed down jail terms of up to five decades for seven men convicted of her murder.

The latest attack on Garifuna leaders marks an attempt to "intimidate" and "silence" their fight for land, Miranda said.

He campaigned for Honduras to comply with a 2015 ruling by the Inter-American Court of Human Rights (IACHR) over land disputes and the Garifunas' right to be properly consulted about planned projects on their lands in Triunfo de la Cruz.

The court found Honduras responsible for the violation of their collective ownership rights after the local municipal government sold Garifuna land to developers and said it had failed to carry out proper consultations with the community.

It ordered Honduras to compensate the Garifunas for their losses and to delineate their collective lands.

But five years later, OFRANEH and the U.N. say little progress has been made on putting the ruling into practice.

"To date, the implementation of the said ruling by the state of Honduras continues to present challenges," the U.N. human rights office in Honduras said in a statement last week.

Conflicts over land in Garifuna communities stem from "the lack of granting of collective property titles in their traditional territory," said Jackeline Anchecta, vice minister of promotion at the human rights ministry.

Officials have been working to implement the ruling in Triunfo de la Cruz, where they have surveyed up to 70% of the land under dispute, she added.

Meanwhile, Miranda says she fears for her own life after the lastest disappearance of fellow OFRANEH activists.

"Today more than ever, I'm at risk," said Miranda. "It's a constant conflict. It's a non-declared war."