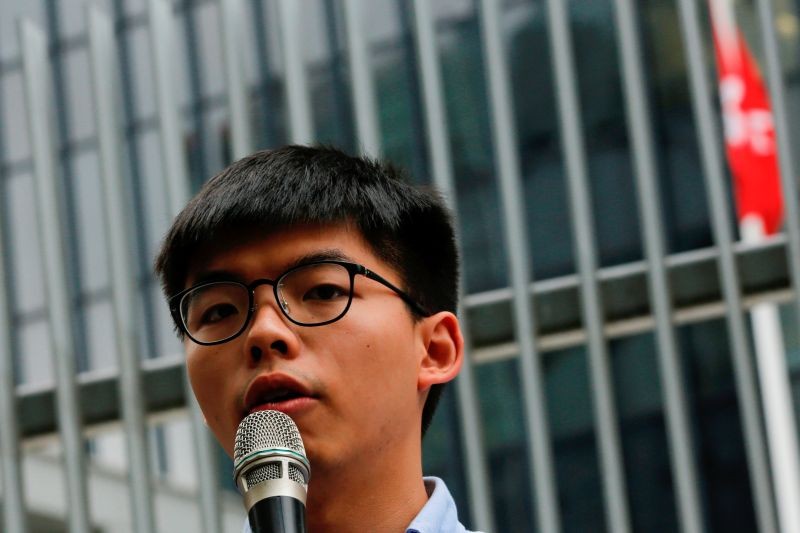 Beijing's swift imposition of the law and a lack of transparency over its details have alarmed some diplomats, business leaders and activists who say it is the latest example of China's tightening grip over the former British colony.

Chinese and Hong Kong authorities have said the law is necessary to tackle separatism, subversion, terrorism and collusion with foreign forces following anti-government protests that escalated in June last year.

Wong, who rose to prominence during a series of protests in 2014, has rallied support for Hong Kong's pro-democracy movement overseas, in particular in the United States, drawing the wrath of Beijing, which says he is a "black hand" of foreign forces.

He has said he expects to be targeted under the law.

"If my voice will not be heard soon, I hope that the international community will continue to speak up for Hong Kong and step up concrete efforts to defend our last bit of freedom," Wong said on his Twitter feed, announcing he was stepping down from his group, Demosisto.

A short while later, Demosisto members Nathan Law and Agnes Chow also said they were also stepping down.

"The struggle of Hong Kong people will not stop, it will only continue with a more determined attitude," Law said in a Facebook post.

Demosisto then said on its Facebook page it was disbanding.

While details of the security legislation have not been made public, many in Hong Kong fear it will be used to silence dissent.

It has also alarmed foreign governments concerned that Beijing is eroding the high degree of autonomy granted to the city when it was returned to Chinese rule in 1997, which underpins its role as a financial centre.

China says the national security law will target only a small group of troublemakers and people who abide by the legislation have no reason to worry.

Independence advocacy group the Hong Kong National Front said on its Facebook page it had shut its Hong Kong office and that its units in Taiwan and Britain would continue to promote independence for the Chinese-ruled city.

China considers Hong Kong to be an “inalienable” part of the country so any suggestion of independence is anathema to its Communist Party leaders. Independence activists fear they too will be targeted by Beijing under the legislation.

Hong Kong pro-independence activist Wayne Chan said in a Facebook post on Sunday he had skipped bail and fled the city amid fears he would be detained.

In a sign of concern among businesses over the implications of the law, a restaurant that has become famous for its support of the pro-democracy movement, the Lung Mun Cafe, said it was quitting a group of like-minded businesses known as the Yellow Economic Circle, or yellow economy.