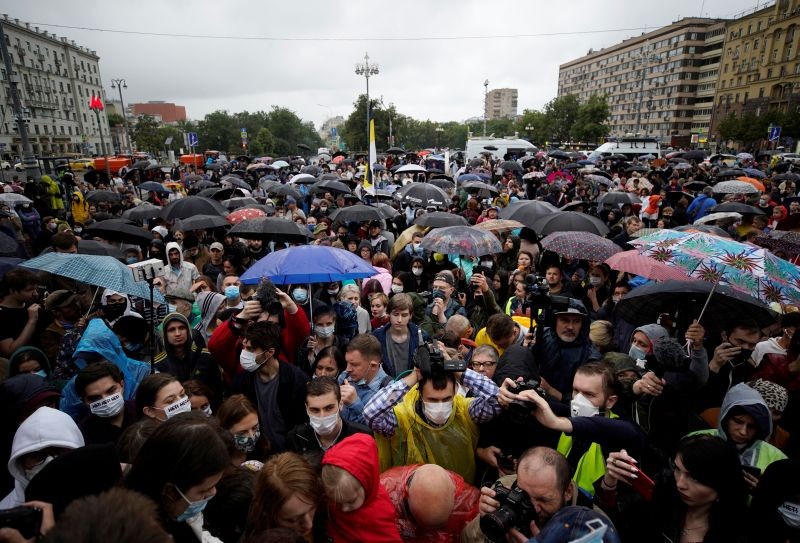 People take part in a protest against amendments to Russia's Constitution and the results of a nationwide vote on constitutional reforms, in Moscow, Russia on July 15, 2020. (REUTERS Photo)
World
16th July 2020

MOSCOW, July 16 (Reuters): Dozens of people were arrested at a protest in Moscow on Wednesday against constitutional reforms that give President Vladimir Putin the option to remain in power for another 16 years, witnesses and a monitoring group said.

About 500 demonstrators, many of whom wore face masks branded with the word "no", chanted calls for Putin to resign and held up banners against the reforms.

Police surrounded them and began making arrests late in the evening after participants started a march down one of the city's main boulevards, with officers in riot gear forcefully rounding up protesters and placing them in vans.

Over a hundred people were detained, according to the rights monitoring group OVD-info. There was no immediate confirmation from police or the government on numbers of arrests.

A vote earlier this month amended Russia's constitution, handing Putin the right to run for two more presidential terms, an outcome the Kremlin described as a triumph.

Opposition activists say the vote was illegitimate and that it is time for Putin, who has ruled Russia for over two decades as president or prime minister, to step down.

"I came here to sign the petition against the constitutional reforms because I am a nationalist," said one 40-year old man in a black t-shirt as protesters chanted "Putin is a thief".

Fourteen-year old Vasilisa said she also signed the petition because Putin "is to blame for the poverty in our country".

"Gay people are killed here, women are beaten up here, and no one is ever held accountable," she said.

Two Russian activists involved in the campaign against the constitutional reforms were detained last week and the homes of five others were searched, ahead of the scheduled protest, which had not been sanctioned by authorities.

Mass gatherings are banned in the capital because of COVID-19 restrictions. Even in normal times, protests of more than one person require the authorities' advance consent.