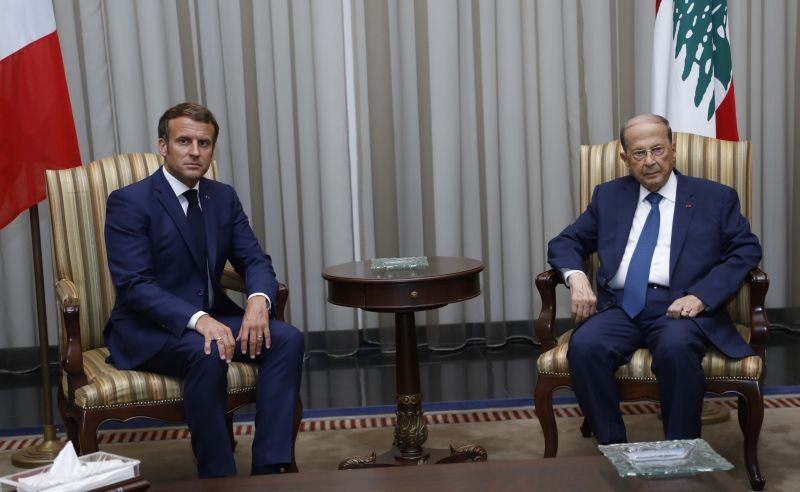 Lebanon's President Michel Aoun meets with French President Emmanuel Macron upon his arrival at the airport in Beirut, Lebanon on August 6. (REUTERS Photo)

BEIRUT/PARIS, August 6 (Reuters): President Emmanuel Macron offered France's support for the Lebanese people on Thursday on a visit to Beirut following a huge warehouse blast, but said crisis-hit Lebanon would "continue to sink" unless its leaders carry out reforms.

Macron was the first foreign leader to visit the Lebanese capital since the explosion on Tuesday that killed at least 145 people.

France has long sought to support its former colony and has sent emergency aid since the blast, but is worried about endemic corruption and has pressed for reforms as a financial crisis deepened in the Middle East country.

After landing in Beirut, Macron said France's solidarity with the Lebanese people was unconditional, but said he wanted to tell some "home truths" to political figures.

"Beyond the blast, we know the crisis here is serious, it involves the historic responsibility of leaders in place," Macron told reporters.

"We can't do without telling each other some home truths," he added. "If reforms are not carried out, Lebanon will continue to sink."

He mentioned reforms of the energy sector, public tenders and the fight against corruption.

Lebanese officials have blamed the disaster on a huge stockpile of a highly explosive material stored for years in unsafe conditions at Beirut port.

But many Lebanese people who have lost jobs and watched savings evaporate in a financial meltdown have blamed it on politicians who have benefited from decades of state corruption and bad governance.

French Foreign Minister Jean-Yves Le Drian called for "concrete action" during a visit to Beirut last month and said protesters' calls for change and transparency had "unfortunately not been heard so far."