India leads global rise in new weekly COVID-19 cases, while deaths down - WHO 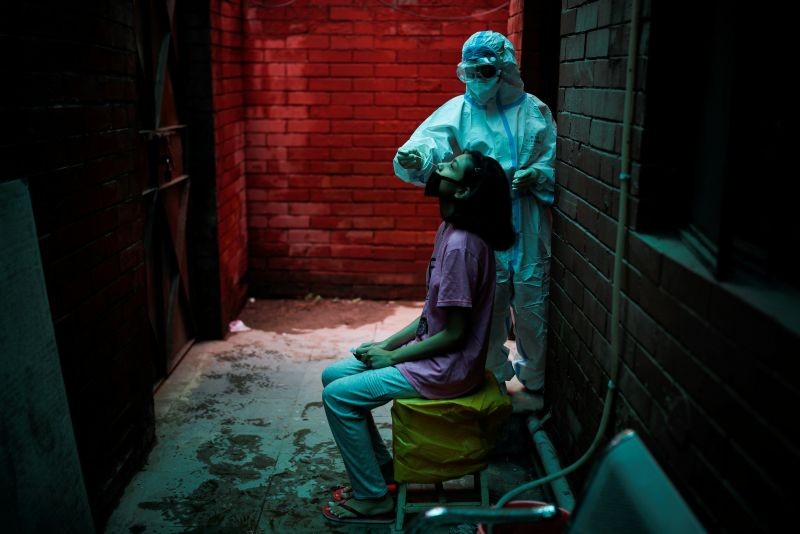 A health worker in personal protective equipment (PPE) collects a sample using a swab from a person at a local health centre to conduct tests for the coronavirus disease (COVID-19), amid the spread of the disease, in New Delhi on August 31, 2020. (REUTERS Photo)
India
1st September 2020

GENEVA, September 1 (Reuters): India reported the most new COVID-19 cases of any country in the past week, its nearly half a million fresh infections pushing the global tally up by 1 percent, the World Health Organization (WHO) said on Tuesday.

Overall global new deaths in the past seven days fell by 3% compared to the previous week, the WHO reported, adding that overall new infections around the world rose by 1.8 million.

The respiratory disease is also spreading in the Americas, which continues to account for more than half of reported cases and deaths worldwide, although there have been slight decreases in some areas, WHO said in its latest update.

Spain, Russia, France, and Ukraine reported the highest number of new cases in Europe in the week to Aug. 30, with a resurgence in Spain matching peaks seen last March and April, the U.N. agency said. New cases in Italy jumped by 85%, it said.

"South-East Asia has reported the largest week-on-week increase, largely due to increased case detections in India," the WHO said. "India has reported nearly 500,000 new cases in the past seven days, a 9% increase compared to the previous seven days and the highest numbers of new cases globally."

In Africa, cases in Ethiopia reached "new highs", while South Africa - which has the fifth most infections globally and the highest number on the vast continent - has continued a downward trend, it said.

Several previous hotspots - including Ghana, Kenya, Gabon and Madagascar - have recorded fewer new cases, the WHO said, adding: "...the figures should be interpreted cautiously as they may be affected by many factors, including the current testing capacity and strategy, and delays in reporting."

Rates have fluctuated in the WHO's eastern Mediterranean region, with the latest highest case numbers seen in Iraq, Iran, Morocco, Saudi Arabia and Kuwait, it said.

More than 25.44 million people have been reported to be infected by the novel coronavirus globally since the new coronavirus emerged in China late last year and 847,965​ have died, according to a Reuters tally.