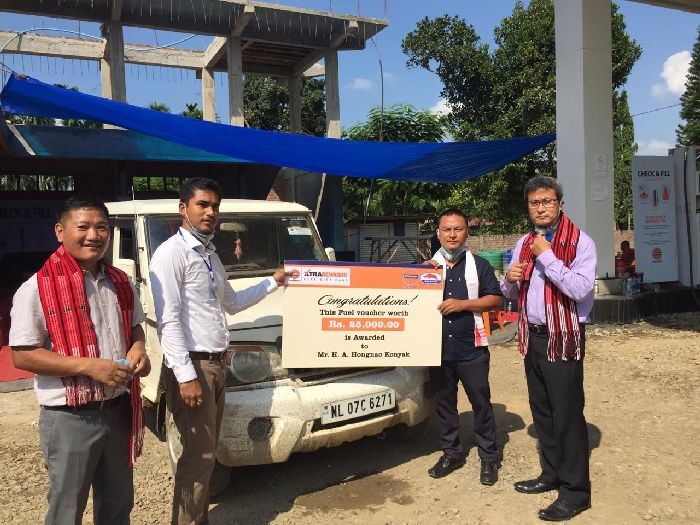 The IOC felicitated Hongnaw Konyak with Rs 25,000 Fuel Voucher Card. During the nationwide lockdown, Hongnaw has selflessly used his private vehicle as 24X7 Free Ambulance Service, when people were struggling for transportation. “He could help many helpless patients, including 48 pregnant women,” stated a press release.

Speaking during the event, Hongnaw said that “The feeling, only human can keep humanity alive” is what inspired him to take up such humanitarian steps. He acknowledged MKK Pegoo DGM (RS) IOCL, CS Boragohain, Asst. Manager (RS) IOCL, and Pakon Phom ADC Tizit Subdivision for recognizing the least of contribution he made for humanity.

While acknowledging the activities of IOC, Pakon mentioned about the coaching centre in Jorhat being sponsored by IOC, and suggested that the same can be done in Tizit where “many underprivileged youth can get golden opportunity to study.”

DGM (RS) IOCL demonstrated how the fuel quantity and quality can be check by customers and know whether the fuel has any foreign particles or altered. He briefly stated about how IOC contributed towards humanity during the nationwide lockdown.