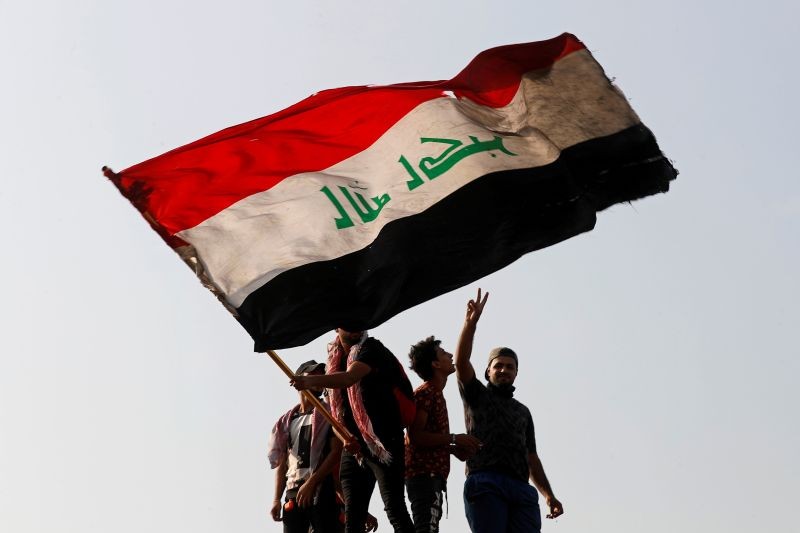 A demonstrator holds an Iraqi flag as another gestures while they gather to mark the first anniversary of the anti-government protests in Baghdad, Iraq October 25, 2020. (REUTERS Photo)
World
25th October 2020

The skirmishes came as hundreds of Iraqis took to the streets of Baghdad and some southern cities to hold anti-government protests, marking a year since mass anti-government unrest that killed more than 500 people.

"We will not stop protesting to demand our stolen rights. We are the victims of corrupted governments," said Najim Abdullah, a protester standing near the Jumhuriya bridge in the capital.

Security forces had deployed in force to control protests that began in the morning, and to stop demonstrators crossing Jumhuriya bridge, which leads to the fortified Green Zone that houses government buildings and foreign missions.

There were no immediate reports of casualties.

Sunday's protests were more subdued than demonstrations last year where thousands rallied in Baghdad and the south, facing off against security forces and militiamen in clashes that maimed and killed mostly young, jobless demonstrators.

Prime Minister Mustafa al-Kadhimi, who took office in May after his predecessor was driven out by last year's unrest, has painted himself as a leader who supports demonstrators.

In a televised address on Saturday he pledged to hold early and fair elections, a demand of many pro-democracy activists, and said security forces would this time around not harm any peaceful protesters.

"We want our freedom. We want our rights," one protester said after throwing stones at riot police above Jumhuriya bridge. He retreated when police responded with tear gas.

The protesters had taken to the streets in mostly uncoordinated opposition to the political elite that has ruled since the 2003 U.S. invasion that toppled Saddam Hussein.

They accuse those in power, especially Iranian-backed parties and militia groups, of fuelling endemic corruption that kept large swathes of the oil-rich Arab country in ruins even during times of relative peace.

Since the 2017 defeat of Islamic State militants, a moment many Iraqis hoped would signal a turning point for their country, millions have struggled to make a living and been deprived of reliable electricity, clean water and education.

Threats, killings and abductions of activists have continued since the protests lost steam earlier this year, out of a combination of protester fatigue and movement restrictions to combat the COVID-19 pandemic.