J&K was run like a Ponzi scheme: Chief Secretary 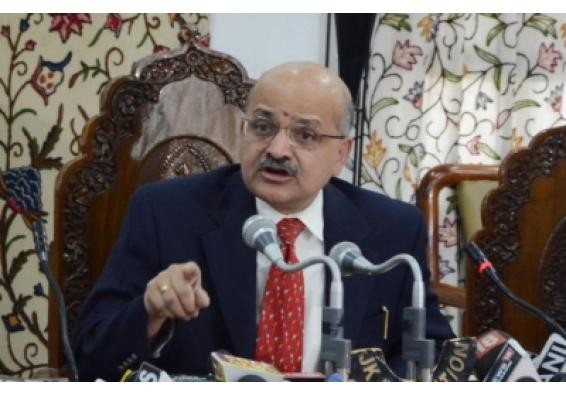 Srinagar, August 10 (IANS): Governance in Jammu & Kashmir was "badly managed and broken", and there was no system, no rule and no process, J&K Chief Secretary B.V.R. Subrahmanyam has said.

The whole political system was captured by feudalism, and Kashmir remained untouched at a time when everything improved in the rest of the country, Subrahmanyam said. Terming the system in the Union territory before 2018 as the "biggest flop", the 1987-batch Chhattisgarh-cadre IAS officer said "our engineering departments are 40 years behind the rest of the country and the technical wings are also much behind."

Subrahmanyam, who was appointed as the Chief Secretary of Jammu & Kashmir in place of B.B. Vyas on June 20, 2018, said Kashmir did not have a single World Bank project 10 years ago. "The first World Bank project of Asian Development Bank came in 2011-2012," Subrahmanyam told IANS on completion of the first anniversary of abrogation of Article 370 from Jammu & Kashmir. The officer took charge as Chief Secretary of J&K on the day when the erstwhile state was put under Governor's rule after the three-year-old PDP-BJP coalition government collapsed on June 19, 2018.

"The rest of the country is marching ahead but this place is still run as it used to be during the time of Maharaja Hari Singh. The whole place is feudal. The political system was captured by feudalism. The spine of functioning remains feudal. No rules were being followed. No regulations were being followed," Subrahmanyam said.

Giving the example of a scheme called 'Rehbar-e-Khel', the officer said 2,700 BA pass outs in sports were taken on a salary of 3,000 per month through district river committees, and after seven years they would be appointed as full-fledged physical education teachers. "These selections were done to fill 2,500 future vacant posts and the selection was to be done by the Staff Selection Board. There was no transparency."

In 2010, the officer said the then government created a National Youth Corps (NYC) in which college youth joined for only two years and Rs 2,000 as honorarium was fixed for them. "It was intended that soon after completion of graduation no youth would come into the NYC. They would be terminated. They were supposed to do blood donation, 'Shramdaan' for the public. In 2015, a total of 12,500 were told that they would be given permanent jobs. In 2017, they were all re-engaged for Rs 2,000 each and they were to be regularised after 10 years."

"This is not a job scheme. The frauds are unbelievable, whether it is employment, whether it is a project." Subrahmanyam said that Jammu & Kashmir is run on 80 per cent central government funds. "Our (J&K) income is Rs 2,000 crore per month and the revenue is Rs 1,000 crore, and 1,000 crore is the share of central tax. However, our annual budget was Rs 1 lakh crore and our actual revenue is Rs 10,000 to 12,000 crore. It means we are stealing the money of the government of India."

The officer said Jammu & Kashmir is far behind in project execution."Five to 12 years are taken for completion of a project. One bridge in Baramulla on the Jhelum is being constructed for the past 26 years. The whole city can be bypassed if it is completed. There is also the movement of the Army from there to go to Uri and other places. This is in the heart of Baramulla. This is the status. The situation is terrible in terms of finances. Things are designed here for corruption."

MGNREGA (Mahatma Gandhi National Rural Employment Guarantee Act) comes to the state and it was said that people can be engaged to monitor rural works, he said, adding "as far as I know, no one in any state in the country was appointed in MGNREGA because they gave the responsibility to village 'gram sevaks'."

"But, around 3,500 people were appointed here under MGNREGA. Nowhere are people appointed in MNREGA. If I tell you who the people appointed were, your head will hang in shame." Clarifying that he was not talking on party lines, Subrahmanyam said "I am talking like a bureaucrat who has seen the system from inside".

MGNREGA is an Indian labour law and social security measure that aims to guarantee the 'right to work'. This Act was passed in September 2005 under the then UPA government of Prime Minister Manmohan Singh.

The officer said that the whole system in Jammu & Kashmir has collapsed which "we are trying to fix".

"The whole state was like a Ponzi scheme which would have collapsed some day. Removal of Article 370 was just a push otherwise the state was anyway on the verge of collapse."