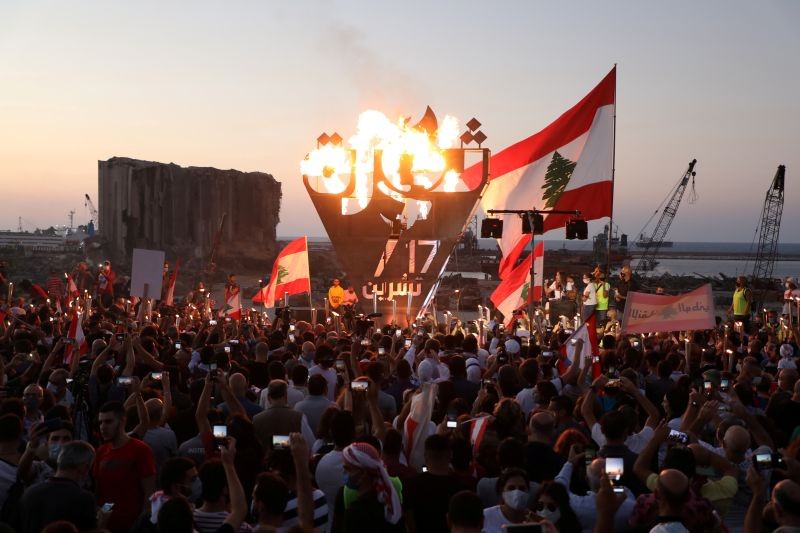 Anti-government demonstrators take pictures of a metal sculpture spelling out the word "revolution" topped by flames during a protest as Lebanese mark one year since the start of nation-wide protests, near Beirut's port, Lebanon October 17, 2020. REUTERS/Mohamed Azakir
World
17th October 2020

BEIRUT, October 17 (Reuters): Demonstrators marched through Lebanon's capital on Saturday to mark the first anniversary of a protest movement that toppled the government but was then overwhelmed by economic crisis, coronavirus and a devastating explosion in Beirut.

The demonstrations that broke out last October spread nationwide against a political elite that had ruled since the 1975-1990 civil war, presiding over an economic crisis and a collapse in the currency.

While the turmoil led to the resignation of prime minister Saad al-Hariri, politicians have since failed to form a government capable of addressing the country's challenges.

The global pandemic and the Aug. 4 explosion at Beirut's port, which killed nearly 200 people, brought further suffering and robbed the protests of momentum.

Those marking the anniversary in Beirut said they were not abandoning their demand for revolution and for President Michel Aoun to step aside.

"The revolution did not die," said activist Rabih al-Zein. "We can hold this corrupt authority accountable and the proof is we brought down two governments."

Hundreds of protesters marched past the central bank, a target of protesters' anger over a financial crisis that has seen the Lebanese pound lose nearly 80% of its value, and the parliament building before gathering near the damaged port.

A metal sculpture spelling out the word "Revolution" and topped by flames lit up the evening sky in front of the port.

The protests come ahead of talks between Aoun and parliamentary blocs to choose a prime minister. Hariri is in the running to form a government, although obstacles remain.

The legitimate grievances of the Lebanese people have gone unheeded during a "harrowing year" of crises, said Jan Kubis, the United Nations special representative for Lebanon.

"People’s commitment to and yearning for deep reforms and changes continues to be strong, even if the momentum has receded," Kubis said. "They have planted the seeds for systemic changes. One year on, their struggle continues."