Liquor worth over Rs 1.6 crore destroyed in 'dry state' capital 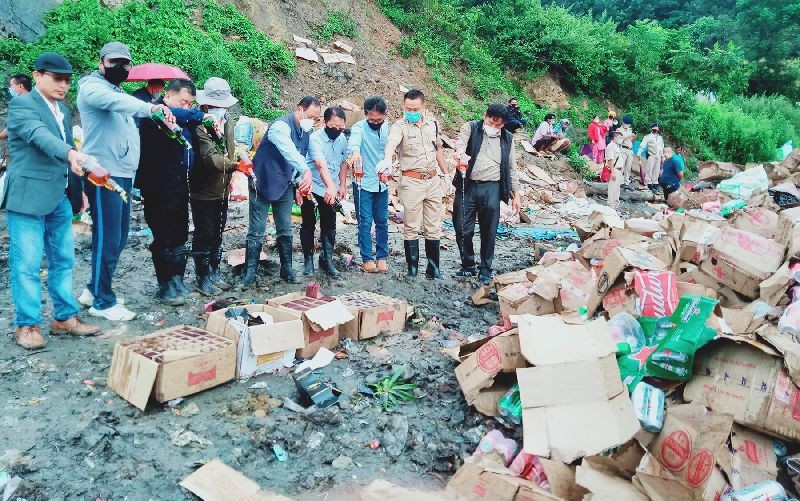 Advisor Zhaleo Rio and others during the destruction of seized liquor on September 25 in Kohima. (Morung Photo)
Nagaland
25th September 2020

Seized liquor amounting to over Rs 1.6 crore was destroyed today at KMC dumping site in Kohima.

In what appears to be one of the biggest quantities of seized liquor destroyed in recent times in Kohima, the excise department stated that the assorted liquor consisted of 2, 294 cases and 165 loose bottles/cans. Converted in terms of bottles/cans, it amounted to 50,304 bottles/cans.

The market value of the destroyed liquor was approximately Rs 1,06,43,270.

The seizures were made by 3rd Assam Rifles Kohima on March 23, 2019 in three locations-Naga Check Gate, Kohima, Old NST area Kohima and New Market area near War Cemetery Kohima and  were kept sealed by excise department in their camp/garrison due to security reason and acute space constraint at the dilapidated excise office, Kohima.

Zhaleo Rio said that total prohibition in Nagaland has been made possible through the ‘prayers of churches and the public’.

He requested the NGOs and churches to continue to actively support the excise department for effective implementation of total prohibition in Nagaland.