Los Angeles parades on hold in the 'City of Champions' 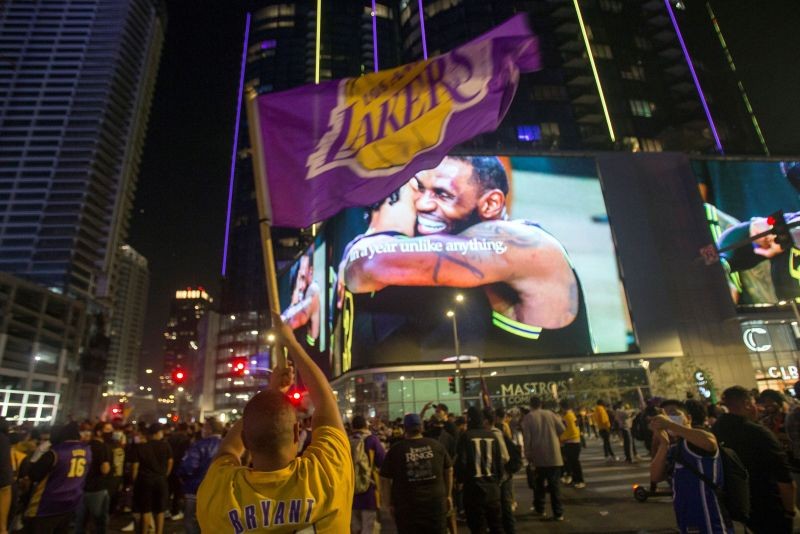 LOS ANGELES, October 29 (Reuters) - In a year when it seemed like nothing could go right, the sports Gods smiled on Los Angeles, rewarding long-suffering fans of the city's beloved Dodgers and Lakers with titles just weeks apart, but formal celebrations will have to wait due to COVID-19.

The Dodgers defeated the Tampa Bay Rays on Tuesday to clinch the club's first championship in 32 years after enduring heartbreaking losses in the 2017 and 2018 World Series.

The LeBron James-led Lakers, stunned by the death of former star player Kobe Bryant in a helicopter crash in January, beat the Miami Heat to end their decade-long title drought earlier in the month.

To guard against the virus, the World Series was held entirely in Arlington, Texas with a limited number of fans in attendance while the NBA post-season took place in a fan-free, bio-secure bubble near Orlando.

But COVID-19 has no off-season, over-ruling the strong desire of players to parade their hardware before tens of thousands of adoring fans.

"Man can we PLEASE have a parade!!!" NBA Finals MVP James, a diehard Dodger fan, tweeted after Tuesday's game.

"I know I know we can't but DAMN I wanna celebrate with our Lakers & Dodgers fans!!! LA is the city of CHAMPIONS."

The pandemic even managed to steal some of the spotlight from the Dodgers win on Tuesday when the team's third baseman Justin Turner was pulled from the game in the eighth inning after testing positive for the virus.

Turner, who had said he had no symptoms, defied the league's orders to isolate and returned to the field during the celebration to talk with his team mates, hold the trophy and take maskless photos.

MLB criticized Turner on Wednesday and said it was investigating the matter. It is unclear how quickly the Dodgers and Rays will even be able to return home.

Although fans of both teams took to the streets in large numbers for rowdy impromptu celebrations in defiance of city orders on the nights of their victories, Dodgers ace Clayton Kershaw preached patience.

"One day we will be able to celebrate," he said.

"There will be a parade. I don't know when, but when that day comes, Turner will be there.