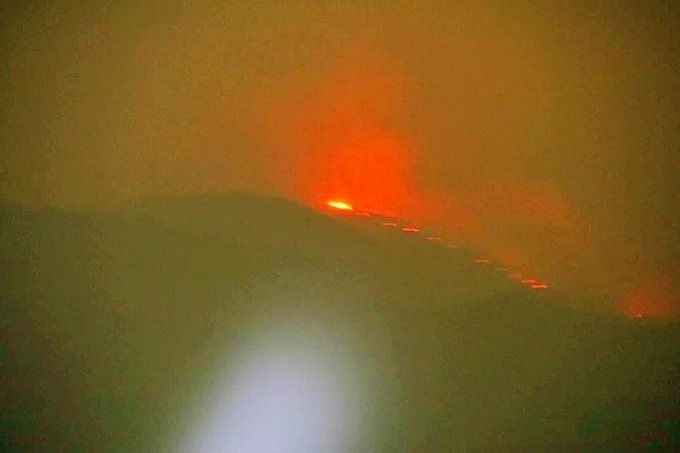 The forest fire at the famous Shirui peak was noticed in the wee hours of March 28. (IANS Photo)
North-East
28th March 2021

Imphal, March 28 (IANS): Manipur Chief Minister N. Biren Singh has sought help from the central government as well as the locals in dousing the fire at Shirui peak in Ukhrul district, officials said here on Sunday.

Forest officials in Imphal said that the forest fire at the famous Shirui peak was noticed in the wee hours of Sunday following which forest officials accompanied by disaster management personnel rushed to the area.

An Indian Air Force statement said that on the requisition of the Manipur government, the IAF is in the process of deploying two Mi-17V5 helicopters equipped with Bambi Bucket to douse the blaze at Shirui.

Senior forest officials said that the sudden increase in incidents of forest fires has become a major cause of concern for the state’s forest department.

A Manipur forest department statement said that it has been observed by the department that forest fires are also caused by burning of debris in and around forests, campfires left unattended, discarded cigarette stubs and intentional acts of arson.

The statement added that these are punishable with imprisonment which may extend up to five years of jail with fine.

The setting of forest on fire is punishable under the Damage to Public Property Act, 1984 and relevant Sections of the IPC besides under the provisions of Indian Forest Act, 1927 and Manipur Forest Rules, 1971.The forest department often urged the people, including civil society and voluntary organisations and youths to render assistance for preventing forest fires in Manipur.

The Shirui Kashung Peak is 2,835 meter from sea level. Most of the major rivers originate from the crevices and slopes of this peak and is the home of the world-famous Shirui (Siroy) Lily (Lilium Mackliniae). Every year in May and June, many scientists and tourists from all over the world visit the place to see the precious flower which blossoms at the hill-top. Shirui peak fire is the third major forest fire in the three northeastern states - Nagaland, Arunachal Pradesh and Manipur - in the past few months. In the mid last month Army troops successfully doused a major forest fire in Arunachal Pradesh’s Dibang Valley district along the China border.

In January, the Army, Indian Air Force, National and State Disaster Response Force, local volunteers and administration jointly doused a major wildfire in the famous Dzukou Valley on Nagaland-Manipur borders after two weeks of battle.The forest fire caused huge damage to the flora and fauna, forest and environment of the Dzukou Valley, which is one of the 10 most beautiful places in the mountainous northeast India.

The Dzukou valley, situated at an altitude of 2,452 metres above the sea level and 30 km from Nagaland capital Kohima, is also a sanctuary for the endangered Blyth’s tragopan - Nagaland’s state bird - and other species of birds and animals.