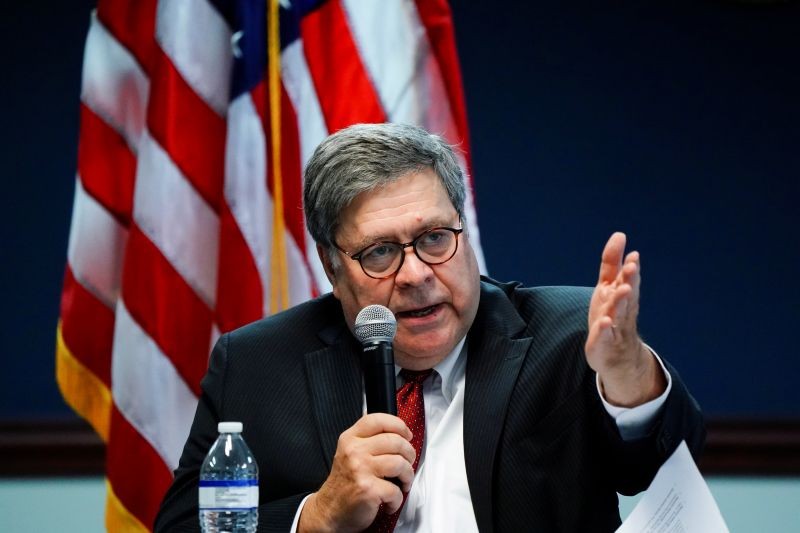 In return, Mexico privately told Barr it would work with the United States to arrest a high-level cartel leader involved with trafficking large quantities of the synthetic opioid fentanyl, the source said.

Reuters was unable to establish which cartel leader Mexico and U.S. officials would be targeting and the source declined to give any names citing a fear of endangering the investigation.

It has not been previously reported that Barr extracted a promise to hone in on a senior cartel leader in return for releasing Cienfuegos.

"Mexico committed to collaborate with the United States in the capture of a primary objective," said the source, who asked not to be identified in order to speak freely.

Daniel Millan, spokesman for Mexican Foreign Minister Marcelo Ebrard, said "what we agreed was to maintain a united front against crime and cooperation that respects the sovereignty of each country."

He said he did not have information regarding an agreement about a high-level capture.

A spokeswoman for the U.S. Department of Justice said there was no deal and referred Reuters to earlier statements that said the case was dismissed in a sign of confidence in Mexican justice and because of diplomatic considerations.

The United States flew Cienfuegos back to Mexico on Wednesday, after a U.S. federal judge dropped charges against him at Barr's request. Under the agreement, he will now be investigated in Mexico.

The decision to release the most senior Mexican defense official ever charged in the United States with cartel collusion met with anger from former agents of the Drug Enforcement Administration (DEA) who said the United States had a strong case against Cienfuegos.

Cienfuegos' arrest at Los Angeles International Airport in October was the result of a multi-year investigation that used wire taps to track a military figure, dubbed "El Padrino" by traffickers.

Investigators concluded "El Padrino" or The Godfather, was Cienfuegos and that he helped the cartel move tonnes of narcotics.

Mexico's government, angry it was not forewarned about the investigation, hailed Cienfuegos' return as a diplomatic achievement and a win for the nation's sovereignty.

Ebrard and President Andres Manuel Lopez Obrador have denied speculation that the decision to return him was linked to Lopez Obrador's refusal so far to recognize President-elect Joe Biden as winner of the U.S. presidential election - a move Lopez Obrador has said was "politically prudent."

After the U.S. conviction last year of Joaquin "El Chapo" Guzman, the best known leader of the Sinaloa cartel, the focus of U.S. and Mexican law enforcement has turned to the rival Jalisco New Generation Cartel, as well as the remaining

The DEA says those two groups are "likely the primary trafficking groups responsible for smuggling fentanyl into the United States."

The leader of the Jalisco cartel is Nemesio Oseguera Cervantes, known as El Mencho. The best known leader of the Sinaloa cartel is Ismael "El Mayo" Zambada. Both men are on the DEA's most wanted list, along with others.

The Mexican foreign ministry spokesman said he was unaware of conversations related to specific cartel leaders.

Fentanyl is a powerful synthetic opioid often mixed in the black market with heroin or fake pharmaceutical pain killers. It is the leading cause of overdose deaths in the United States.

The Mexican government has not clarified how the plan to bring Cienfuegos back to Mexico came about, or when it requested his return.

The source, along with another senior government official, said Barr first proposed the idea of withdrawing charges against Cienfuegos on a call with Ebrard in early November.

The source said the idea came from Barr, and was not initially a request from Mexico.

Ebrard spokesman Millan said Mexico requested that the charges be dropped, but could not confirm when, or whether the request happened before a Nov. 6 call with Barr.

Ebrard this week confirmed two calls with Barr, one in October and one on Nov. 6.

"The proposals...were from Attorney General Barr," during a November call, the source said, referring both to the idea to drop charges and the commitment to catch a senior capo.

Asked about whether Barr had proposed to Mexico dropping the charges, rather than the other way round, the Department of Justice spokeswoman said she could not comment on contacts with foreign governments regarding investigative matters.

While the administration of outgoing U.S. President Donald Trump promised to weaken Mexico's cartels, there had been no high profile arrests in the past four years before Cienfuegos' capture as he traveled to the United States for a vacation.