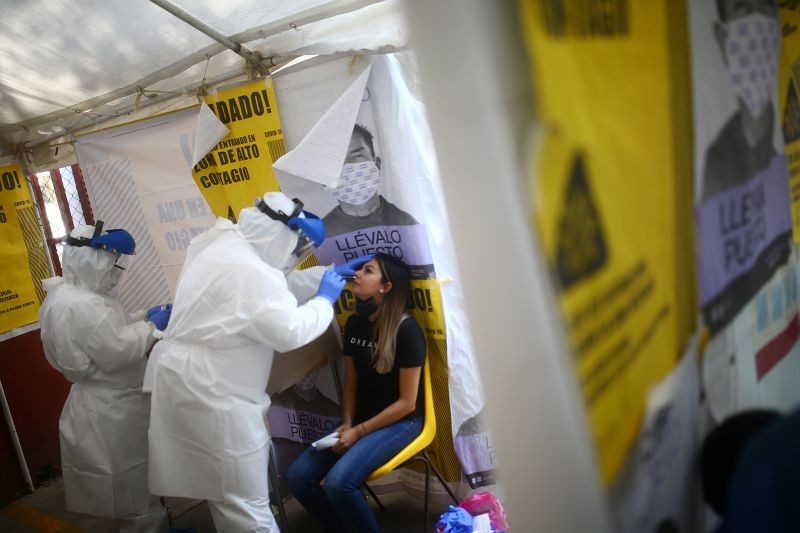 A healthcare worker in personal protective equipment (PPE) collects a sample using a swab from a person at a local health centre to conduct tests for the coronavirus disease (COVID-19), amid the spread of the disease at the Tepito neighborhood in Mexico City, Mexico on September 1, 2020. (REUTERS File Photo)
World
4th September 2020

MEXICO CITY, September 4 (Reuters): More health workers have died from the coronavirus in Mexico than any other country on the planet, Amnesty International said on Thursday, highlighting the high toll the pandemic was taking on frontline medical staff around the globe.

At least 7,000 health workers around the world have died after becoming infected with the coronavirus, including 1,320 in Mexico, Amnesty said.

Other countries with high mortality rates include United States, Brazil and India, where health worker death tolls stand at 1,077, 634 and 573.

"Many months into the pandemic, health workers are still dying at horrific rates in countries such as Mexico, Brazil and the USA," said Steve Cockburn, Head of Economic and Social Justice at Amnesty International.

"There must be global cooperation to ensure all health workers are provided with adequate protective equipment, so they can continue their vital work without risking their own lives."

The United States, Brazil and India have registered the highest number of overall deaths and confirmed cases. Between them, they have recorded more than 14 million coronavirus cases and almost 387,000 deaths, according to Reuters data.

Mexico has registered more than 610,000 cases and nearly 66,000 deaths. Mexico's government earlier this week said 102,494 health workers had contracted coronavirus and the death toll had climbed to 1,378.

Amnesty called for more help for workers, citing Brazil as an example of a place where health professionals complain about the lack of protection equipment.

"Throughout the pandemic governments have hailed health workers as heroes, but this rings hollow when so many workers are dying from a lack of basic protection," added Cockburn.