Militants attack in Indian Kashmir as it locks down for anniversary 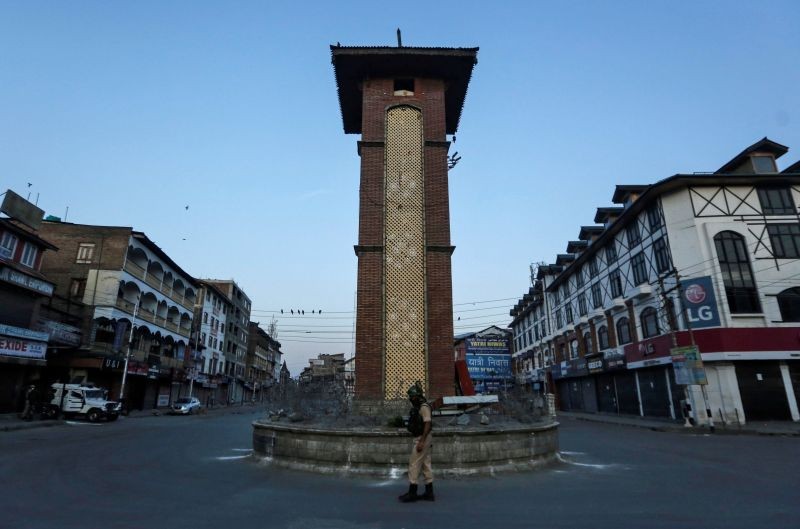 An Indian Central Reserve Police Force (CRPF) officer stands guard at an empty square during a lockdown on the first anniversary of the revocation of Kashmir's autonomy, in Srinagar on August 5. (REUTERS Photo)
India
5th August 2020

SRINAGAR, August 5 (Reuters): Militants attacked Indian security forces with a grenade and gunfire in Kashmir on Wednesday, defying a strict security lockdown on the first anniversary of the government's scrapping of the disputed Himalayan region's autonomy.

There were no immediate reports of casualties, police said.

Authorities blanketed Kashmir with troops, who laid out barbed wire and set up road blacks to prevent demonstrations a year after Prime Minister Narendra Modi's government stripped India's only Muslim-majority state of its special rights.

The government said the change was necessary to develop the strife-torn region and integrate it with the rest of India but it infuriated many Kashmiris and neighbouring Pakistan.

Some critics saw it as part of a pattern by the Hindu-nationalist government aimed at sidelining Muslims. The government denies that.

Kashmir is claimed in full by India and Pakistan, which have gone to war twice over it, and both rule parts of it. Militants have been fighting Indian rule in its part of Kashmir since 1989 in a conflict that has killed at least 50,000 dead, according to official figures.

Pakistani Prime Minister Imran Khan was due to travel to the Pakistani-controlled part of Kashmir to mark the anniversary later on Wednesday.

He reiterated a long-standing Pakistani appeal for international intervention to help resolve the dispute over Kashmir between the nuclear-armed neighbours that has bedevilled their ties since the end of British colonial rule in 1947.

"It is imperative that the international community steps in immediately and backs its words of condemnation with practical steps that will force India to reverse its present course against the Kashmiri people," he said in a statement.

India has ruled out any outside mediation over Kashmir.

In Srinagar, a handful of members of Modi's ruling Bharatiya Janata Party (BJP) gathered at their headquarters to unfurl an Indian flag to mark the occasion. The party had long campaigned for ending Kashmir's special status.

Party spokesman Altaf Thakur said similar celebrations took place in all district headquarters in the territory. "It is an important and historic day for our party," Thakur told Reuters.

Elsewhere in Srinagar, police and paramilitary troops enforced the strictest lockdown for several months, stopping public movements, including a proposed meeting of politicians.

"One year later the authorities are still too afraid to allow us to meet, much less carry out any normal political activity. This fear speaks volumes about the true situation on the ground in Kashmir," former chief minister Omar Abdullah said on Twitter.

Last August's change in status in Indian Kashmir was accompanied by a communication blackout, widespread restrictions and mass detentions, including of elected leaders.

Most of those measures have been eased, although internet speeds are still restricted. More recently, many families have been confined indoors because of coronavirus lockdowns.