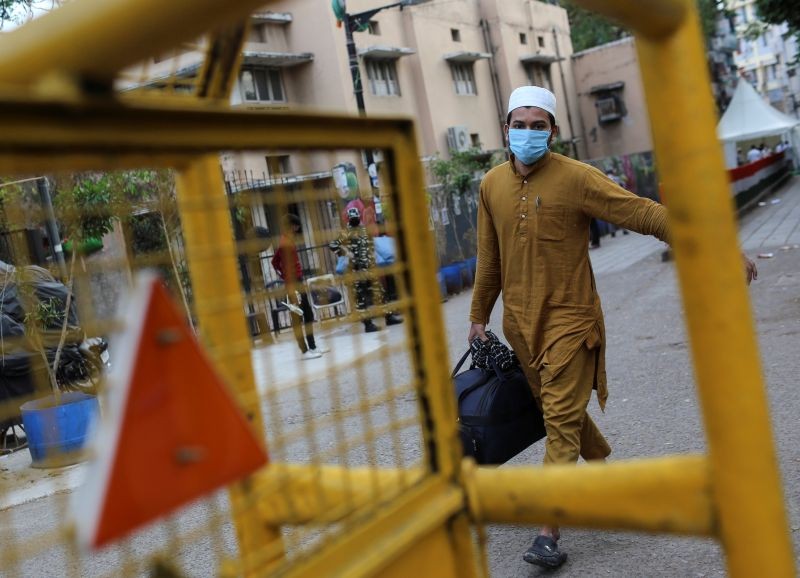 A man wearing a protective mask walks to board a bus that will take him to a quarantine facility, amid concerns about the spread of coronavirus disease (COVID-19), in Nizamuddin area of New Delhi on March 30, 2020. (REUTERS File Photo)
India
22nd July 2020

MUMBAI, July 22 (Thomson Reuters Foundation): Coronavirus quarantine charges levied by an Indian state on migrant workers who are being flown home from Gulf nations will drive many returnees further into debt and put them at risk of destitution, campaigners and labourers said on Wednesday.

India in May began a drive to repatriate nearly a million citizens from around the world as the pandemic left many jobless and struggling to survive. The arrivals are quarantined in hotels, college hostels or empty houses for about a week.

The southern state of Telangana is charging at least 8,000 rupees ($107) to put its returning citizens in quaranatine at hotels for a week, raising concern among former Gulf workers who have large debts, little savings and few job prospects at home.

Mahender Deepkonda, who lost his security guard job in Qatar in March, said he had to take out a fresh loan to pay for a flight home in May and was falling ever deeper into debt.

"The cycle (of repayment) is broken. My outstanding loan amount has gone up by three times," said Deepkonda, 38, who paid 15,000 rupees for a two-week hotel quarantine before Telangana reduced the fee and period in May as per government guidelines.

"I earn 500 rupees as daily wages for farm labour in my village," he told the Thomson Reuters Foundation by phone from Jagtial. "I don't know when I will be able to repay this loan."

Arvinder Singh, Telangana deputy secretary for non-resident Indian affairs, said returning workers were charged for travel and quarantine "as per the government of India guidelines".

The official declined to give further details, and did not specify how many returnees had been charged for quarantine.

An estimated 9 million Indian migrants work in the Gulf states with most of them in low- and semi-skilled jobs, the United Nations International Labour Organization (ILO) says.

About 500,000 overseas citizens have returned home since May, either flown or sailed home by the government or put on chartered flights sponsored by companies and community groups.

Kerala has received the most arrivals of all Indian states - with at least 135,000 people from the UAE, Saudi Arabia and Qatar alone, according to government data - yet the state has not imposed a quarantine fee on its returnees.

"We did not consider charging people at any point ... even though they are coming from abroad, they are poor, they have lost their jobs," said Amar Fettle, Kerala state's nodal officer for COVID-19.

Labour unions estimate that about 10,000 Indian migrants have returned from the Gulf to Telangana since May, and are urging the local government to follow Kerala's example.

"The government should think about the poor in these times, but they are asking for money," said Guggilla Ravi Goud, convener of the Telangana Gulf Workers Joint Action Committee.

"This is milking their misery for business," he added.

Cases of COVID-19 continue to rise in India with almost 1.2 million infections, behind only the United States and Brazil.